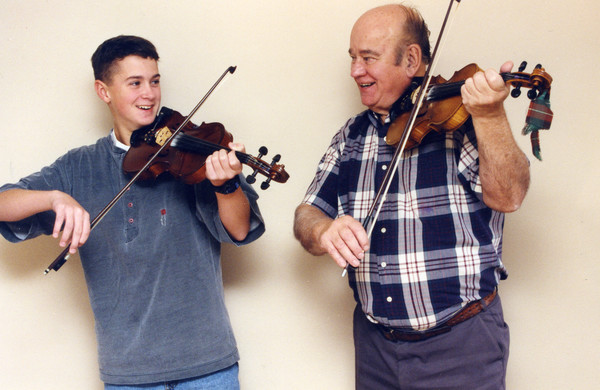 Pete Doiron’s father Adolphe Doiron was the local blacksmith and the premier fiddler in the Rustico region. As a youngster Pete often heard fiddling at house parties, tea parties, parish picnics, school picnics, and weddings. He fondly recalls that at his family’s own house parties, sometimes several step-dancers would get up to dance at once.Dance parties around Rustico
Read transcriptStep-dancers shake the house
Read transcript

Doiron took up the fiddle at age 11 while recuperating from an appendix operation. He played regularly for a couple of years, slacked off, then took some formal lessons after he joined the Canadian Navy; one of his teachers was Matthew LeFort of Montreal, who had played for a while with Don Messer. Doiron started playing for dances while still in the Navy, and also played for a while in country and western bands.

When he retired and moved to Summerside, Doiron became a founding member of the Prince County Fiddlers. After John Gauthier stepped down in 1993, Doiron took over as musical director of that organization and served in that capicity for several years.Founding of Prince County Fiddlers
Read transcript

Doiron’s approach to jigs and reels tended to be clean, rapid, and devoid of such “Celtic” style flouishes as grace notes and double-string bowing. He delighted in lush settings for waltzes and set-tunes, however, and – as can be heard on his duets with grandson Adam Driscoll (Westphalia Waltz, Maple Sugar and Four-String Polka) – he also enjoyed devising and performing close-harmony parts.

In the early 1990s, Pete released a cassette recording of his playing entitled The Fiddling Chef.