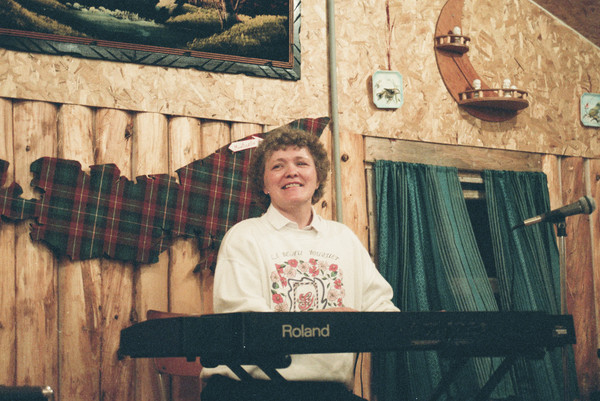 In the late 1980s and early 90s, Jenny O’Hanley McQuaid and her friend Teresa MacPhee Wilson performed as the popular comedy duo Bridget and Cecily, in which the two parodied contemporary Island life by assuming the viewpoint and mannerisms of old-fashioned country-women. In 1990, McQuaid and Wilson founded the Monticello Ceilidh – a weekly event featuring fiddling, singing, step-dancing, and square-dancing – that would serve as a prototype for literally hundreds of similar events around the Island.

Jenny was second youngest in a family of twelve children; her father served for many years as Lighthouse Keeper in the fishing village of Naufrage. Her parents did not play music, but they had an old-fashioned pump organ at home. Her brother Danny O’Hanley learned to chord behind fiddle music, and quite a number of fiddlers would visit the house in order to play with him, including their neighbor, Connie GallantFiddlers visit the O'Hanleys
Read transcript

During the fishing season, Acadian workers from Prince County often sojourned near Naufrage Harbor. Many of them were musically inclined, and locals often used to organize music and dance parties at the fishermans’ warehouse. Among the fiddlers who played at those parties, or at other dance parties in and around Naufrage, were JD MacAdam, Roddy Mel MacPhee (brother of Teresa Wilson and George MacPhee), John Joe MacCormack, and Pius Sutherland. Jenny also remembers a Mi'kmaq fiddler named Gus Nicholas who played regularly for dances at the Monticello School.

On the rare occasions during childhood when she could get her hands on a fiddle, Jenny would try to pick out tunes on it. From the way people talked at the time, however, she got the sense that if you didn’t have fiddling in your genes there was little point even in trying. In any event, she didn’t take up the instrument herself until she was in her 40s.

As an educator, McQuaid was in an excellent position to assess the effects on Island traditions of school consolidation. She points out that the old one room schoolhouses were as much social centers as they were educational institutions. Moreover, the dances and other fund-raising activities required to keep the old schools going were once a major force keeping communities together.Schoolhouses as Community Centers
Read transcriptDownside of School Consolidation
Read transcript