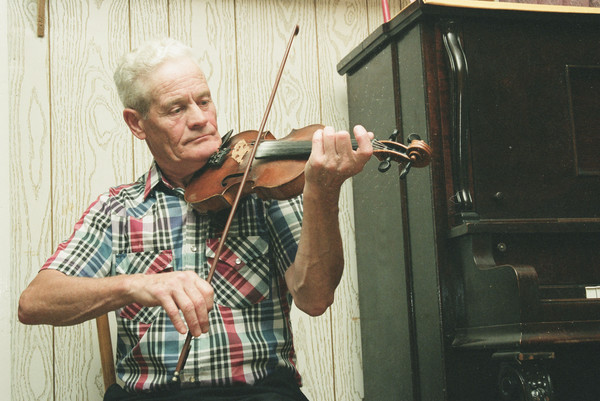 Bill Koughan took up fiddle at age 12, having been inspired both by listening to fiddlers at local dances and on the radio. His uncle used to host house parties, and great fiddlers such as Naius Curley, Martin Power, Charlie and Walter Walker, and Bill Weatherbie often came by to play. Koughan’s favorite fiddler on radio was Hélaire Gallant of Rustico, who played with a band called the Merry Makers on CFCY’s Kelly & McInnis Show.

Koughan’s father played a bit of fiddle, and showed him the rudiments. Bill then took fiddle lessons for a couple of winters, and continued on his own learning by ear. Before long he was playing freqently at nearby house parties and schoolhouse dances. He recalled that the average pay at the time for playing at schoolhouse dances was perhaps a dollar or two per night

Koughan was a founding member of the PEI Fiddlers’ Society, and for a few years he attended meetings of the Queens County Fiddlers. One consequence of his involvement with the organization is that he became determined to learn how to read music.

I learned to read music just in these last few years. [Before that] if you heard a tune and wanted to know how to play it, I could never pick it up by ear. [But] if you have the music of it you're all set. There's hundreds of tunes if you wanted to learn them and play them.

In 2005, Koughan and several members of his extended family got heavily involved in helping to raise money for establishing a new fiddle program at the Donagh Public School.