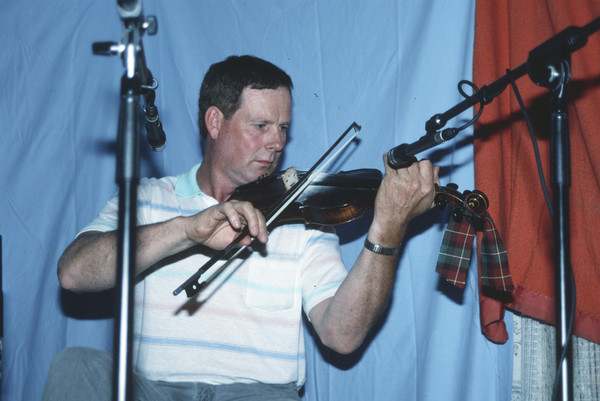 Allan MacDonald is the son of well-known northern Kings County fiddler Hector MacDonald, and father of fiddler Ward MacDonald. Many of his sisters played guitar or piano and sang beautifully.

Allan grew up on the family farm and started playing guitar at about age 10. By the time he was 14, he was regularly accompanying his father at weddings and dances. When he was 15, the two of them built a dance hall on the property, using lumber from trees they cut down themselves from their own wood lot. The Hall was a great success right from the start; for one thing, everyone loved to dance to Hector’s fiddling,MacDonald, Allan - Hector’s dance hall
Read transcriptHector MacDonald’s fiddling
Read transcript

Allan took up the fiddle himself right around the time the hall went up; the instrument came relatively easy to him because he already had many of Hector’s tunes committed to memory. By the second year the hall was in existance, he had progressed enough to help his father out by playing for a set or two over the course of an evening.How he got started
Read transcript

Later on, Allan became enchanted with Cape Breton fiddling (two of his early heros were Donald Angus Beaton and Winston Fitzgerald). In the late 1970s, he joined the local branch of the PEI Fiddlers’ Society, known as the Eastern Kings Fiddlers. He recalls that right around this time he attended a benefit concert and heard Kenny Chaisson play beautifully at a benefit concert; this essentially hooked him on the Cape Breton sound and repertoire for all time: “I couldn't believe the music that man was takin’ out, and him a young fellow! But Kenny sat up there and my God he opened my eyes. I said, ‘That's the way the fiddle should be played.’ I've been trying to do that ever since.”