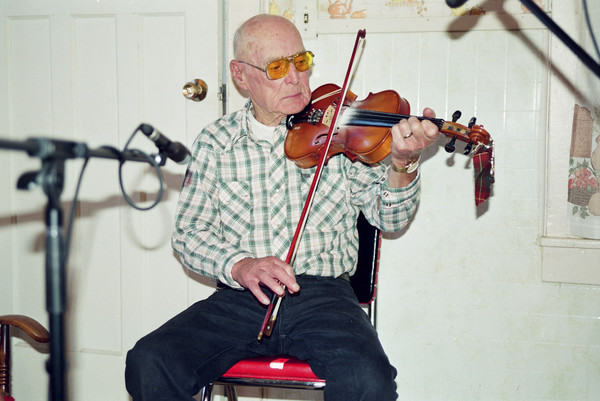 Charlie Sheehan’s father James was well known in the region as a fine fiddle player. When Charlie was small, other fiddlers in the area often dropped by the house on Sunday afternoons to swap tunes. He also heard fiddling at house parties and other dances in the area. Some of the players Sheehan remembered from his youth were his uncle William Longaphie (father of Gus Longaphie), Pete Simon Chaisson (father of “Old Peter” Chaisson), Neil Cheverie, and Jimmy Simmons.

Sheehan taught himself to play at age 15 and was soon playing for local dances. At frst, he learned most of his tunes from his father and from the other fiddlers in the community: “If liked the tune,” he observes, “I'd get it in that old noddle there and keep it there till I picked it up on the fiddle.”

Charlie recalls that when he was young, the accompaniment instrument of choice was the pump organ, whose sound he still much preferred to that of the piano.Sheehan prefers the pump organ
Read transcript

Charlie got away from the fiddle when he went into the Army during the Second World War, and didn’t get back to it for nearly fifteen years. After that point, most of the new tunes he learned came from recordings of Cape Breton fiddlers. In the 1980s and early 90s, he practiced regularly with the Eastern Kings County Fiddlers and performed with them at the Rollo Bay Scottish Fiddle Festival and other venues.