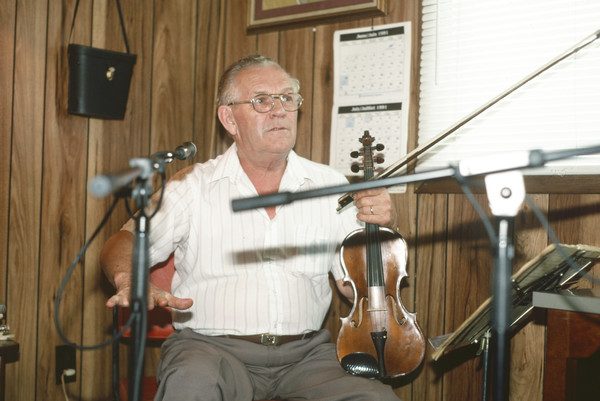 Bill MacDonald helped organize both the PEI Fiddlers’ Society and the Queens County Fiddlers. He became a dedicated composer of fiddle tunes late in life, and the three tunes he plays here are all his own compositions.

There was plenty of fiddling in and around North Lake when Bill was young. His father Stephen MacDonald played, as did his great uncles James and Angus MacDonald. Neil Cheverie – winner of the Great Contest of 1926 and great uncle of Omar Cheverie – was a near neighbor.

Bill recalls that when his father had trouble remembering how a tune started, he would call on Bill (then only four years old) to come and jig the opening strain for him.

When MacDonald was young, most of the house parties in his district were held at his own home.

I've seen my mother make lunch [snack] for fifty. Because in those days we lived handy to the road, and everyone went by and heard the music, they'd come in. No one was ever turned away. They danced two squares, two square dances at a time: two different rooms, and the piano and the violin would be in the center.

Bill was drawn to the fiddle, but he was pressed into service at an early age to accompany his father and other local fiddlers on organ and piano. Despite being bored with piano, he always did his part when asked to provide accompaniment at community dances.

In the early 1970s at the age of 46, MacDonald retired from carpentry, took up fiddling and studied note-reading with a local music teacher. Not long afterwards, he began composing, and by the early 1990s he had filled up several notebooks with his original fiddle tunes. He told us that quite often tunes would just come to him, but in order to hold on to them he needed to quickly grab a fiddle and pick them out.New tunes come to mind
Read transcript