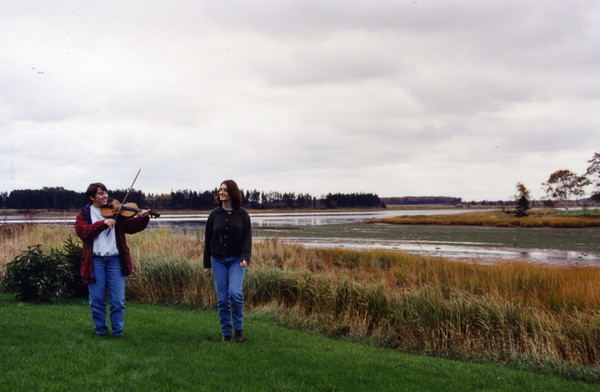 Anastasia DesRoches was perhaps the first strong young player from Prince County to come out of the Island’s Fiddling Revival. She started as a step-dancer and then studied fiddle with Kim Vincent, an Irish-style player who taught for many years through a Summerside Music School known as the PEI College of Piping. She began performing regularly in the Island’s burgeoning ceilidh scene in 1993-4 and in 1996 was tapped to contribute to The Prince Edward Island Style of Fiddling: Fiddlers of Western PEI (Rounder Recordings). She also appeared on a popular Island recording called Party Acadien.

Anastasia started teaching fiddle classes in the mid-1990s. By 2006, she was one of the most prolific and highly-respected fiddle teachers in Prince County. In 2005, she received a grant from the Province to record and notate original fiddle tunes by Islanders of Acadien descent; ultimately she collected nearly three hundred such tunes and published them in a book called Le vent dans les voiles (in English, Wind in the Sails).

Accompanist Megan Bergeron is the daughter of Hélène Arsenault Bergeron.