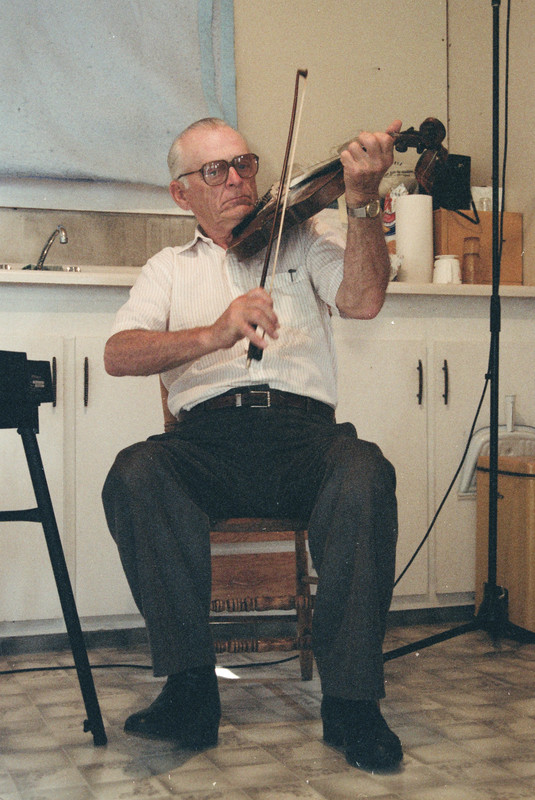 Stephen Toole’s music represented a true blend of the Eastern and Western PEI fiddling sounds. It was both lively and ornate, featuring both highly syncopated bowing accents and understated double stops.

Toole grew up on a mixed farm in southwestern Queens County, one of a family of ten children. His father Walter Toole and his brother Charles played fiddle, and two sisters played guitar and piano. Quite often they would have musical evenings at home. Since there was only one fiddle in the house, Walter, Charles, and Stephen had to take turns playing.

Stephen took up the fiddle at age 11, and was playing for dances by the time he was 14. At that time, people in the district took turns hosting house parties; they also organized schoolhouse dances and Lawn Parties.Toole, Stephen - School picnics in southwestern Queens County
Read transcriptToole, Stephen - Dances around Green Road
Read transcript

Toole learned his first tunes from his father and from other fiddlers who played for dances in the area. Among them were his great uncle Michael McCatty, Dave Ferguson, Golden and Gordon Graves, Morris McQuaid, and Patrick Trainor. He observes, “There was probably three or four fiddlers every dance you'd go to.” Generally, they would all take turns providing the music.

In the 1950s, Stephen was still playing for dances three nights a week, he would then get up early to drive to a carpentry job in Summerside. Then for many years, he organized his own weekly square dances in and around Charlottetown; at the last of it those dances took place at Birchwood High School. In the 1970s, he was a founding member of the Queens County Fiddlers.

Of special interest to fiddlers: Toole demonstrates how Island fiddlers warmed up by running through the double-stops typically used for common fiddle keys, a process he calls taking sound out of the fiddle. He also describes what it takes to make a “good” Island fiddler.Demo: fiddlers’ warm-up; common double stops
Read transcriptToole, Stephen - What makes a good fiddler?
Read transcript