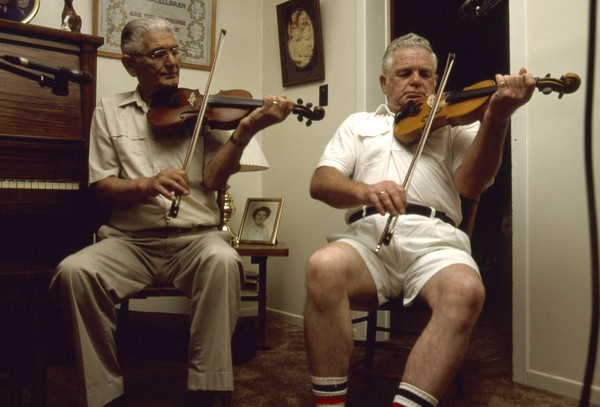 These brothers come from a prominent northeast Kings fiddling family. Their father Joe Chaisson and their grandfather Lem Chaisson were major dance fiddlers in the region. Other prominent local fiddlers they heard frequently when they were growing up were Johnny Willie MacIntyre, Joe Eddie Cheverie (father of Omar Cheverie), Pete Simon Chaisson, and the latter’s son Joe Pete Chaisson.

Johnny Joe Chaisson started playing fiddle at about age 12 and pretty much taught himself (his father showed him how to tune the instrument, then said, “There, you're on your own.”). He learned his first tunes by listening to his father’s playing; he found that he could jig the tunes pretty easily, and it was just a matter of finding the notes on fiddle.

Johnny Joe started playing for dances at age 14; from that point until well into the 1980s he was on the go playing for house parties and schoolhouse dances in northern Kings County from Morell to East Point. He also played at Clifford Peters’ Barn Dance in Rollo Bay for 12 years. At one stage, he was playing for dances five nights per week; then for a long while he cut back to only two or three nights per week. In the 1930s, his wage for playing was about $1 per night; by the 1970s it had increased to all of $20 per night.

Johnny Joe stopped playing out in the mid-80s due to a heart condition. He subsequently lost a considerable amount of playing facility when a left-hand finger was injured in a wood-splitter accident.

Alphonse “ Phonsey” Chaisson started fiddling during his youth, but got away from it when he joined the Canadian military in the early 1950s. He took the fiddle up again in the 1970s when he retired from the military. He remembered many of the local tunes he learned during his youth, and added to his repertoire by listening to recordings of Cape Breton fiddlers.

Johnny Joe expressed regret that the younger generation of players was not picking up the older Island repertoire. On the other hand, he rejoiced that two of the most promisiing young generation players at the time were his own grandsons, Paul MacDonald and JJ Chaisson.