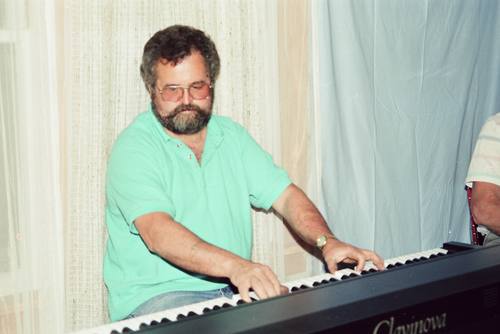 Gary Hughes is a well-known accompanist from northeastern Queens County. He’s the product of a noted musical family; his father was  fiddler Earl Hughes, his uncle was fiddler and composer Emmett Hughes, and his sister Joan Hughes is also a fine piano accompanist. When Gary started to play there were no piano players around; his father bought a piano and Gary figured out on his own how to accompany the fiddle. Soon they were playing together at dances, weddings and other events throughout easatern PEI.

Initially, Gary’s father helped him with the chords; as Gary puts it, “He knew how he figured the tune should sound and that's what we went by. It's all by ear.”

Elsewhere on this website, Hughes' can be heard accompanying the fiddling of Allan MacDonald as well as that of his uncle Emmett Hughes. An example of his solo piano playing can be accessed below.