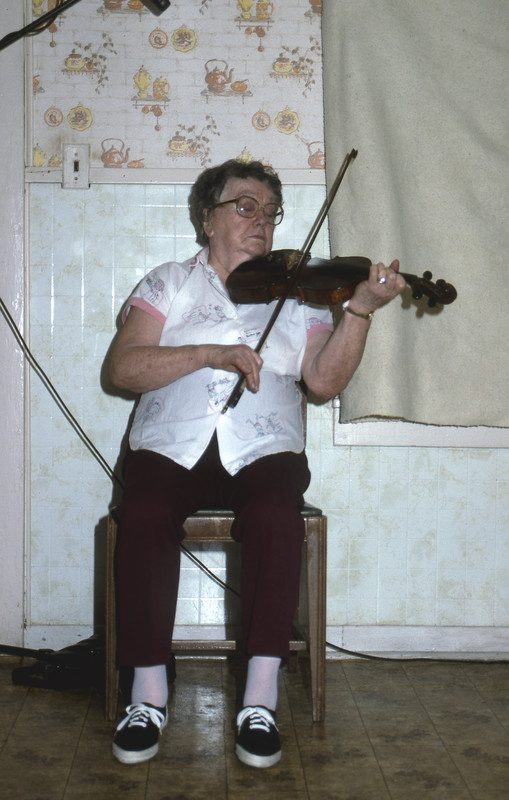 Hilda MacPhee MacDonald came from an extended fiddling family. Her father Roddy Joe MacPhee used to play at most of the the parties and weddings around Selkirk. Her uncles Archie and Neil MacPhee played fiddle, as did several of her brothers: notably Mel MacPhee, the father of fiddlers George MacPhee (whose voice can be heard on some of Hilda’s oral history selections) and Teresa MacPhee Wilson.

One of the tunes Hilda’s father most liked to play is still known locally as Roddy Joe’s Reel (in other parts of the Island it is called Pride of the Ball or The Queen’s Marriage).

When Hilda was 6, her father helped her learn to play by showing her where to put her fingers to “catch the tune.” Her mother helped by “jigging” tunes to Hilda till she got them in mind. She played her first benefit concert a year or two later at the hall in St. Margarets. The tunes she played there were Rally Round the Flag and Fisher’s Hornpipe.Father helps her learn
Read transcript

When Hilda was young, there was a dance held almost every night within a radius of a few miles of Selkirk: “They used to have quite a few parties then: house parties in the summertime. Nearly every house would have a party. And then they used to have parties in the schools. It'd be a big schoolhouse party.” She recalls that at these parties people danced both quadrilles and breakdownsMacDonald, Hilda MacPhee - Recalls the old eight-handers
Read transcript (eight-hand reels).

Work parties provided other occasions for dancing; she remembers spinning frolics and plowing frolics. There was also plenty of dancing at old-time weddings. Hilda remembers one in particular in Fort Augustus where festivities continued for two days.A two-day wedding
Read transcript

Besides members of her own family, some of the fiddlers who played for Selkirk-area dances were Sandy Carter, John and Ronnie MacInnis, Ronnie Archie MacPhee, and Joe Lem Chaisson (father of Johnny Joe Chaisson). Probably the most highly regarded player of her youth was Jimmy Simmons of Cablehead, renowned for his polished “shivers and shakes” (known nowadays as cuts or birls).MacDonald, Hilda MacPhee - Story about Jimmy Simmons
Read transcript

Hilda was in great demand to play at these dance parties, but on pump organ rather than fiddle, because in those days fiddling was considered to be mostly a man’s calling. This state of affairs was far from absolute, however. According to several accounts, during the Island’s Prohibition era she sometimes played fiddle for dance parties held on rum-runners’ ships stationed off the three mile limit. And when her niece Mary MacPhee Warren got married in Montreal, Hilda brought out her fiddle and essentially transformed the event into one big Island dance party.Wilson, Teresa MacPhee - Aunt Hilda plays in Montreal
More info