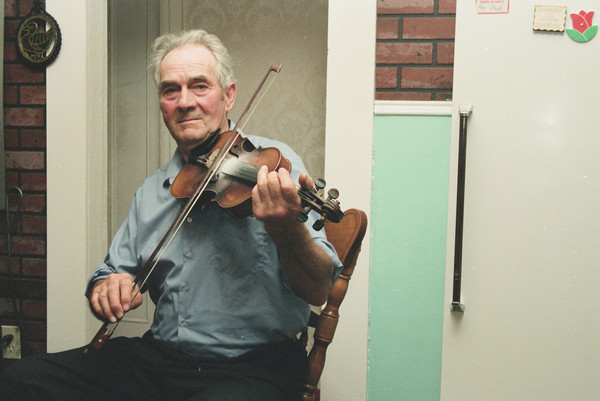 Reg Banks came from a musical family whose roots lie in Ireland and Newfoundland. He began to play at age 10, learning his first tunes from his father – who jigged them around the house – and from older fiddlers in his community, most notably his cousin Jimmy Banks. Another source of tunes was noted Kings County fiddler Jack Webster. Webster drove the local mail route via horse-drawn vehicles and Banks would sometimes intercept him at the family mailbox with fiddle in hand in hopes of coaxing out a tune.Banks, Reg - Learning from Jack Webster
Read transcript

Banks had been a very active dance fiddler in central Kings County during the 1940s and 50s, but a hand injury in 1960 that lopped off half of his fourth finger severely curtailed his ability to note the high passages of tunes. Banks got away from the instrument for quite a while, then returned to it in the 1980s. He was soon playing regularly at Nursing homes and benefit concerts, and in 2006 at the age of 83 he was one of the last remaining traditional fiddlers in central and southern Kings County. He has also composed a number of tunes, including Reg Banks’ Tune, Commercial Cross Special, and Brenda’s Reel.