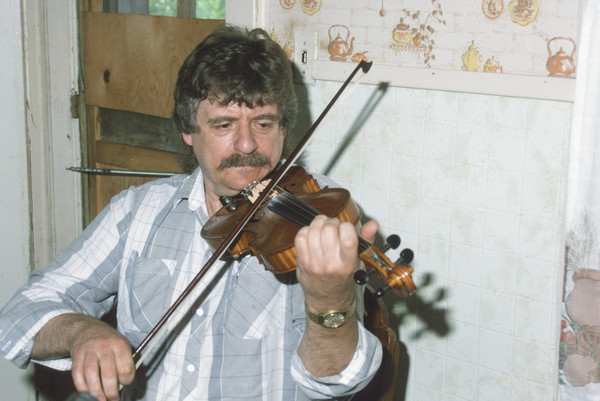 Gary Chipman learned his first tunes on fiddle at age 5 from his father Jackie Chipman (b. 1913), who was a well known Charlottetown-area fiddler. Gary then took formal lessons from Kathleen McGuigan (an aunt of Jim Hornby), and later expanded his repertoire by listening to Don Messer's broadcasts and recordings. He became a great admirer of Messer, and feels strongly that much of the criticism leveled at the latter by the Island’s traditional players is unwarranted.Chipman, Gary - Messer’s critics are unfair
Read transcript

Chipman learned quickly, and while still quite young he was often hired as featured fiddler by local commercial dance bands. By the 1960s, he was playing regularly at dance halls around the Island – an experience he recalls with mixed feelings because of the pronounced tendency for patrons to erupt into unruly behavior.Chipman, Gary - Dance hall violence
Read transcript

As interest in fiddle music was beginning to decline around the Island in the late 1960s, Gary began focusing more and more on playing guitar and bass. He learned to play a wide variety of popular musical styles such as country and western, rock ‘n’ roll, bluegrass, and swing. He then returned to the violin in the 1980s, as the Island’s Fiddling Revival was gathering steam. Because of his varied musical interests, Chipman has been very much in demand for decades on the Island scene as both a performer and sideman.