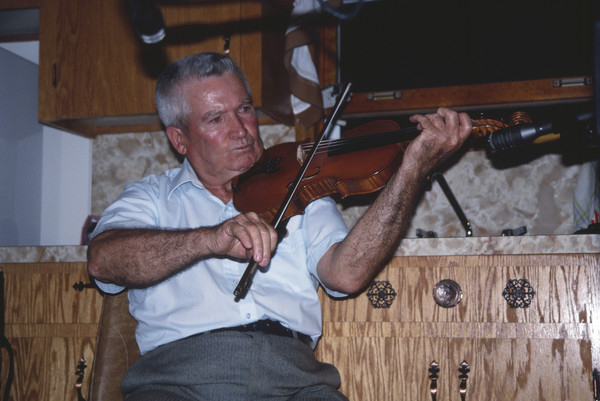 Emmett Hughes grew up in a prominent fiddling family from Northeastern Queens County. When he was only 5 or 6, he could remember and “jig” tunes so well that his father Dan Hughes would often send him to learn tunes played on a neighbor’s spring-powered gramophone (Emmett would then jig or whistle the tune for his father to learn on fiddle). Like other Islanders of his era, Emmett also learned to square dance at a young age; he understood that you would not be permitted to join a set unless you had learned properly.Tunes from the gramophone
Read transcriptLearning to square dance
Read transcript

As a young man Emmett played for countless schoolhouse dances, house parties, and country weddings (more on weddings). He also competed in many fiddle contests, of which he certainly won his fair share: most notably a Charlottetown event in 1967 billed as the Maritimes Fiddling Championship. Emmett toured around the Island on several occasions with famed Cape Breton fiddler Winston Fitzgerald, for whom he sometimes served as an opening act. In the 1980s, he started composing his own tunes, and in the early 1990s he published a book of original tunes called A Composition of Fiddle Tunes. A few years later he published a second volume of original tunes. Some of Hughes’ orginals appear here in two medleys, beginning with The Melba Tree and Rachel’s Favorite, respectively.What folks wore at house parties
Read transcriptHughes, Emmett - Country weddings
Read transcriptMore wedding details
Read transcriptMore wedding details
Read transcript

All of the music appearing here was recorded in 1991. Hughes had been suffering severely from arthritis for several years and had pretty much stopped playing by the 2006 session, which was exclusively a verbal interview.