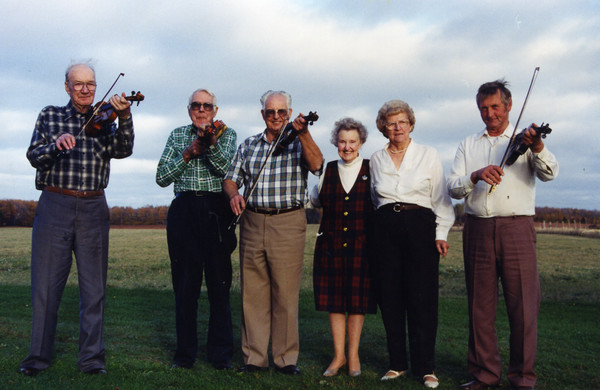 Warren Leard’s family ran a flour mill in Coleman for three generations. His father still used old fashioned millstones, but in Warren’s time they made the conversion to a steel roller mill. By the early 1990s, theirs was the last operating flour mill remaining on PEI.

A few decades back, when farmers who brought in their grain happened to be fiddle players, they would often be invited to the house for a cup of tea and a few tunes. Warren’s wife Bernice MacDonald Leard would generally accompany on piano. One fiddler who frequently took part in these sessions was Elmer Robinson.Fiddling at the flour mill
Read transcript

There was no fiddling in Leard’s immediate family but his father’s sister was adept at playing fiddle tunes right out (note for note) on piano. His parents bought him his first violin at age 9, and he learned by watching and listening to older fiddlers in the community.

In the 1980s, Warren and Bernice organized a musical ensemble called the Warren Leard Group, which performed at nursing homes, asisted living sites, and benefit concerts. Among the other members of the group were Everett Boulter, Alton and Francis Hardy, Harry Lecky, and Linda and Gail MacDonald.

In July 1992, Elmer Robinson invited Warren and two other fiddling friends -- Eddy Arsenault of St. Chrysostom and Frank O'Connor of Kildare Capes -- to join in during his recording session. This made not only for a very festive occasion, but allowed us to record some great group fiddling. Some group fiddling recordings made from that session appear below under the heading, "Tunes from the Robinson Gathering."