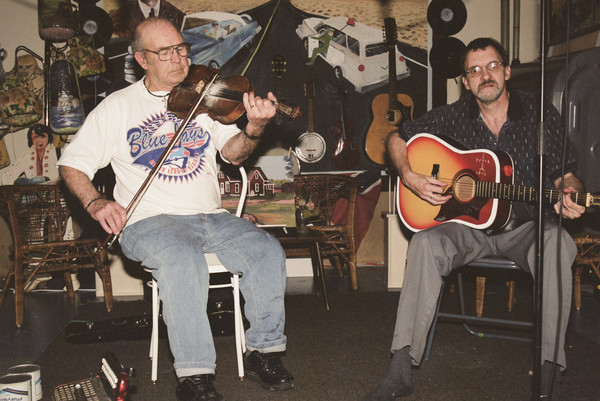 Pat Doucette grew up in the western Prince County district of Mimenegash, where his father ran the Post Office. His parents often held music and dance parties at home. His father and another local man played the accordion, Carl Thibodeau played fiddle, they had guitars in the house, and several people kept time by beating on household objects such as bakepans, knitting needles, wood blocks, and horseshoes. One frequent participant at these parties was guitarist and singer Clifford Wedge.Music parties at home
Read transcript

Some other well known fiddlers in the area were Andrew Jones, Ray Jones, and Arthur Arsenault. Doucette himself was particularly taken with the music of a fiddler named Willie Thibodeau, whose music he describes as “sweet, just like the angels.”Doucette, Pat - Thibodeau’s beautiful music
Read transcript

When Doucette was 14, he bought a mandolin for $7.95 from Eaton’s catalog, and became quite an adept player. When the musicians who had agreed to play at his wedding got drunk and didn’t show up, he got out his mandolin and provided all the jigs and reels the occasion required.

Pat didn't take up the fiddle until his late 30s. Despite this late start, he became an excellent player in the West Prince style, with a strong rhythm and good sense of phrasing. He once won first prize at the PEI Fiddle Championships at Tyne Valley. He is widely known on the Island because his country music band appears regularly on local Cable Television. An earlier lineup of the band included Hélaire Gallant – father of Louise Gallant Arsenault – on piano.Robinson, Peter - Tyne Valley Contest
Read transcript

Doucette is a true Renaissance Man. Not only is he a good musician, but he is also a composer (Irish Moss Festival Reel), a prolific painter and carver, and a designer of odd and unusual musical instruments. His best known musical invention is an instrument known as "the cans," which consists of two tobacco tins with a guitar string suspended in between. The string is plucked with a flatpick, and pitch is altered by pulling on or relaxing one’s grip on the tins, which in turn changes the length of the string. Doucette plays this instrument on Golden Slippers and Red River Valley.