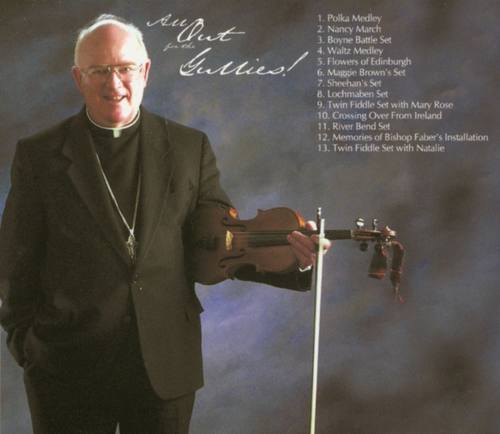 Fr. Faber MacDonald grew up in Little Pond, Kings County, a community where fiddling and dancing were often front and center.

I remember my father on his farm having constructed a machine shed and to open it: had to be a dance! That was the custom; to open up a new building you danced, you see. The parish hall wasn't far from where I lived, and many of the fiddlers who came there, especially at winter, would stop at our house to put their horse in and also to get a lunch before they’d go to the hall and play. I would accompany my mother to the hall, and I'd sit there all night and watch. I observed first hand very early the central place the fiddler had in the life of the people.

Fr. Faber took up the fiddle as a youngster, and taught himself to read music while while working for the Royal Bank in Nova Scotia. During his years in Nova Scotia he became aware that a local clergyman named Fr. John Angus Rankin helped to organize the Cape Breton Fiddlers’ Association. After six years working for the Royal Bank, he returned to PEI to complete his studies at St. Dunstan’s University (now UPEI) for a Bachelor of Commerce degree. He then attended St. Paul’s Seminary in Ottawa for four years and was ordained to the priesthood in 1963. Throughout this entire period playing the fiddle remained one of his favorite forms of recreation.

In the fall of 1976 Fr. Faber was a newly appointed pastor at St. Pius X Parish in Parkdale when he began to give some thought to forming an association for fiddlers on PEI along the lines of the one recently founded in Cape Breton.He first discussed this idea with a parishioner named Bill MacDonald (no relation) and a number of other players. As the latter recalls, it soon became clear that the time was ripe for a much larger project. The ultimate result was the founding of the Prince Edward Island Fiddlers’ Society.MacDonald, Faber (speech) - Founding of the PEI Fiddlers’ Society
Read transcript

The fiddlers who attended the initial meetings embraced a number of notions and practices that represented significant departures from Island tradition, including playing fiddle tunes in large ensembles, performing standard versions of tunes, and learning to read music. And because of hard feelings that had arisen over the years as the result of competitions, they agreed with virtual unanimity to refrain from participating in fiddle contests.MacDonald, Faber (speech) - Island fiddlers give up contests
Read transcript

When Rev. MacDonald was appointed Bishop of Grand Falls, Newfoundland in 1980, he passed on to others the mantle of leading the PEI Fiddlers Society. Over the next two decades, he tried to make his visits home coincide with the dates of the Rollo Bay Fiddle Festival, so that he could monitor the progress of the Island’s young players. In 1999 he was appointed Bishop of the Diocese of Saint John, New Brunswick. He returned to PEI in retirement in 2008. Bishop MacDonald died February 17, 2012.

Two years before he died, Bishop MacDonald made a generous donation to the Robertson Library at the University of UPEI to help acquire and preserve Celtic music and culture, with an emphasis on fiddling. He also remembered the Robertson Library in his will, with the aim of supporting efforts to preserve Island music. These two generous gifts made it possible for the Robertson Library to partner with the Canadian Museum of History (and curator Ken Perlman), and initiate the Bowing Down Home project.