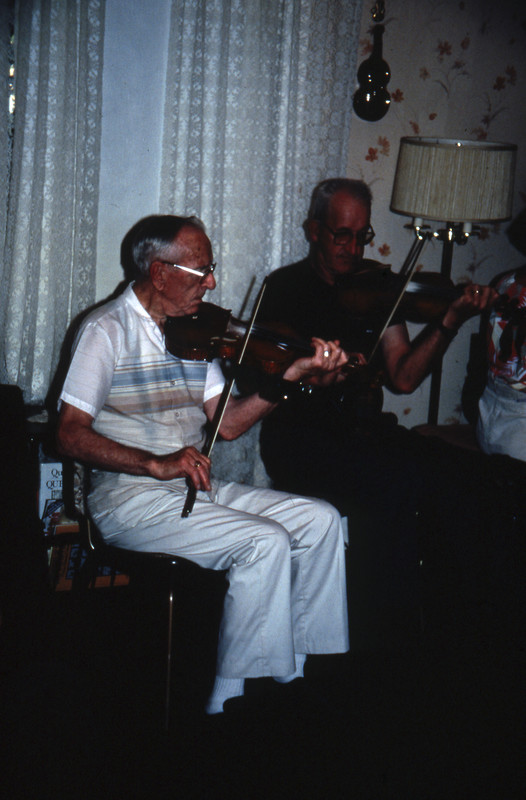 Roland Jay was the son of Lem Jay, the first fiddler ever to play on Island radio.

Roland took up both fiddle and piano when he was quite young. He started fiddling at age 7: “First off I’d sit on his knee; he held the fiddle and worked the fingers while I worked the bow: to get an idea about it.”

Roland spent most of his early years working on his piano playing. He often accompanied his father, and also developed the ability to play fiddle tunes right out (note-for-note and up to speed) on piano. When Lem played on radio, Roland often accompanied him on keyboard. Sometimes he simply chorded along; at other times he doubled the melody with his right hand while maintaining a powerful rhythm with his left.

Jay began playing fiddle for dances at 12 or 13; the first ones he played for were ice cream festivals organized to raise money for the local schools. He tells us that it was often the custom for fiddlers to provide music without recompense at local benefit events, and that there were powerful pressures in the community that maintained this state of affairs.Pressures from the clergy
Read transcript

Roland was joined at his recording session by his neighbor, fiddler Angus McPhee; McPhee participated in the interview and plays along on Homeward Bound. Also on hand was Jay’s daughter Cynthia Jay Crane, who – following in his footsteps – had become an expert piano accompanist adept at playing tunes right out. By 2006, her son Aaron Crane was becoming known around the Island as an up and coming young fiddler.