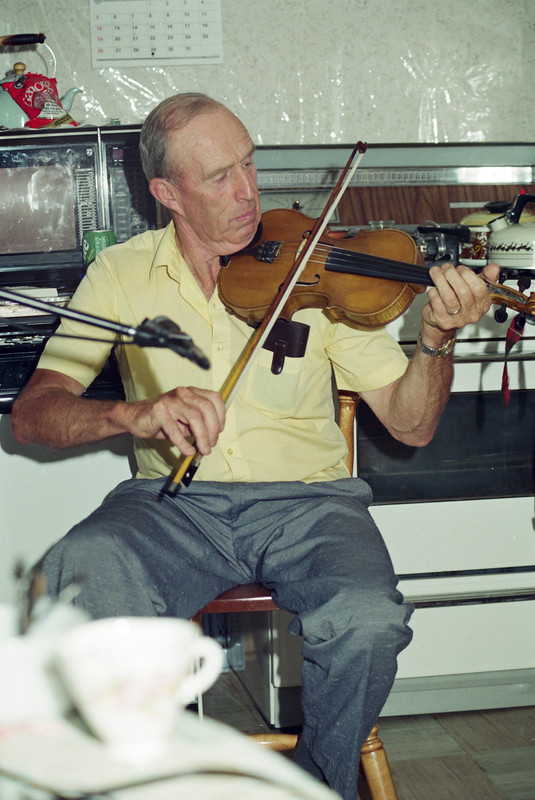 When Alvin Bernard was young, people in his area frequently got together in the evenings at events called parlor socials; there would be card games, music, and of course square dancing. There would also be dancing at weddings, wedding showers, and (in the summertime) at the local skating rink. Generally, there was a fiddler in each community who provided the music for all such events.Bernard, Alvin - The Fiddler’s Role
Read transcript

Bernard learned the rudiments of playing at age 12 from fiddler Andrew Johnson, who lived just down the road. He then continued learning on his own, picking up tunes by ear both from local fiddlers such as Bill Durant and Bernie MacKinnon, and from fiddlers he heard on the radio. In terms of the latter, important sources for him (in rough chronological order) were Québecois players via station CHCN (New Carlisle, Quebec), Don Messer and Ned Landry via CFCY, and stations from Nova Scotia that broadcast Cape Breton fiddling.

Alvin started playing for local dances in his early 20s, and early on began working regularly with guitarist Edwin Simmons; they remember that when they started out an average evening’s pay for playing a dance was $1.50.

In the 1960s, local interest in fiddle music and dance began to fall off, a phenomenon that Bernard and Simmons attribute to the coming of television and exposure to pop culture.Bernard, Alvin - Effects of TV and pop culture
Read transcript

In the late 70s, Bernard became a founding member of the Prince County Fiddlers; he also joined Rubin's Jamboree, a group of about a dozen local musicians who played at community and charitable events (two other members were Leo Farrell and Ralph Hardy). He also began teaching others to play by taking part in an Island-wide adult education program known as Community School.