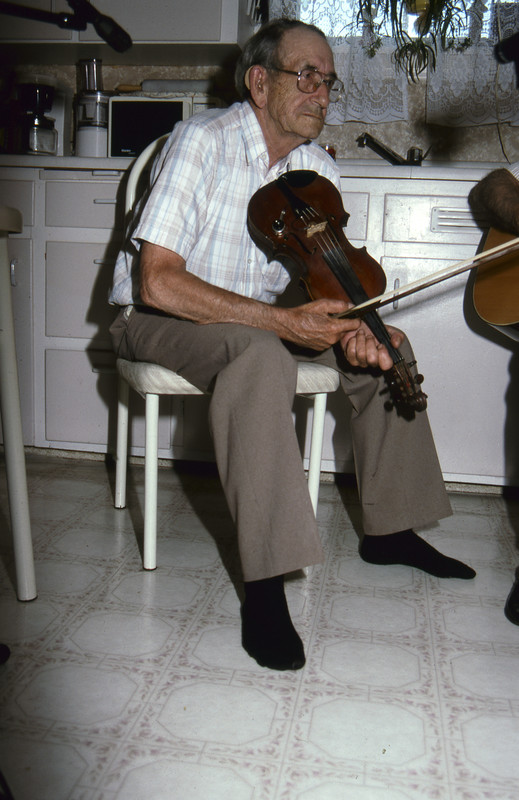 Archie Stewart came from a fiddling family. He started playing as soon as he could reach the fingerboard and learned both technique and repertoire by watching his father, William Stewart, and by watching other older fiddlers in the region, such as Otis Jackson, Billy Murphy, Ward Crane, and Jack Webster. Later on he also learned some tunes from Don Messer, and from other fiddlers on Island radio. He played for his first dance at about age 12.

For several years beginning in the mid-1930s, he teamed up with a few other young local musicians and formed a five-piece band (fiddle, mandolin, piano, and two guitars) that played widely at tea parties, school picnics, hall-dances, house parties, and weddings in the region. All the youngsters were multi-instrumentalists, and they were known for switching instruments on nearly every number.

Later on, Stewart was much in demand on his own account to play for dances at community halls within about a five mile radius of home. He tells us that at one point, he played for most of the dances in Kings County south of Montague, while Jack Webster played for most of the dances north of Montague. In 1948, Stewart was declared Kings County champion at a fiddle contest in Montague.

Archie was the kind of person who was always looking to understand the world around him, and who was always asking other fiddlers questions. Consequently, he was able to to put many of the forces that shaped fiddlers lives into sharp relief. He tells us, for example, that during his youth fiddle dances were at the center of community social life, and fiddlers – though they often went often unpaid – were as essential to their districts as teachers and clergymen. And because in effect they were the only game in town, fiddlers were often under continual pressure to supply music.Stewart, Archie - “There was nothin’ else”
Read transcriptStewart, Archie - Third most important person in the town
Read transcriptStewart, Archie - Fiddlers must play when asked
Read transcript

Stewart also felt very strongly that being a good a dance player required getting a “message from your music through to the people.” In other words, your music had to be lively enough to virtually lift people off their seats and on to the dance floor.Gift of Liveliness
Read transcript

Archie stopped playing much in public when square dancing went into sharp decline in the 1970s, and did not feel drawn to participating in the PEI Fiddlers’ Society. For many years, he and guitarist Chester MacSwain frequently played together just for their own amusement. He felt strongly about holding on to the old traditions, and viewed with regret the tendency for many younger players to eschew local styles and tunes in favor of those coming via the media.

We had our own music before Don Messer ever came to Prince Edward Island. We had our own style of playing; it’s a mixture of Scotch, Irish and French. We play traditional Prince Edward Island tunes that was played when I was a little boy. A lot of fiddlers on the Island changed to Cape Breton style playing when it became popular. But a bunch of us fiddlers from Southern Kings here, we don't play Cape Breton style music. We play the way we learned to play when we were young. The old fiddlers around here like Billy Murphy, Ward Crane, and Otis Jackson: the style that they played, we still play that same style of music.

Of special note: Archie describes the kind of tunes he uses to accompany each figure of the local Lancers. For purposes of illustration he uses the tunes Me Love is But a Lassie, Old Man & Old Woman, Jubilo, and Princess Reel.Demo: Tunes to accompany a Lancers
Read transcript