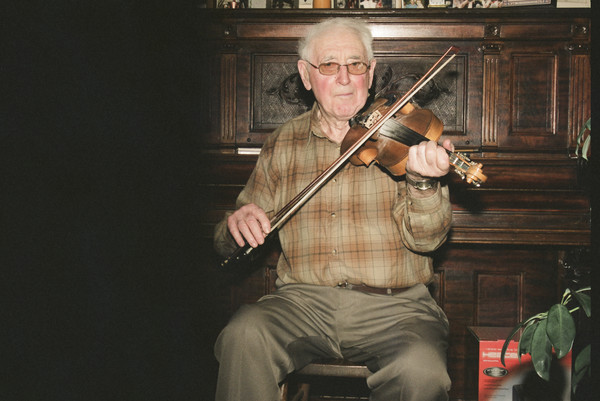 Leo Farrell was the scion of a relatively well off farm family, which substantially supplemented their income by raising foxes and selling their pelts. As a youth, he was still responsible for coming up with his own spending money, and found that playing for dances was more lucrative than hiring himself out as a laborer to local farmers.Dance playing income
Read transcript

Leo’s father had been able to afford a family car as early as 1926, and when Leo came of age in the 1930s he got a car of his own, along with a warning that if he ever wrecked that one it would not be replaced. Thereafter Leo never felt the urge to over-indulge in alcoholic beverages. Having the car enabled him to play music – not only at local house parties and frolics – but at several commercial dance halls that were just then emerging in Prince County. By the early 1940s, he was playing for a circuit of dance halls that ranged throughout the eastern two-thirds of Prince County from Borden to Portage.Virtues of restraint
Read transcriptHouse parties around Central Lot 16
Read transcriptWood chopping frolics
Read transcript

As Farrell tells the story, he developed an urge to play fiddle very young, before in fact he had ever heard one played. He saw a fiddle hanging on the wall at his maternal grandmother’s house, and immediately felt the urge to bring it home (his maternal grandfather, Tom Woods had been a good fiddler, but had passed away before Leo was born). Leo got hold of the fiddle after much pleading, carved his own bow, and obtained hair for it from the tail of a farm horse. Since there was no music in the house, he learned the rudiments of playing from a local woman; the first tune she taught him was Wreck of the Old No. 9.Farrell gets started
Read transcript

In 2006 at age 90, Farrell still enjoyed learning new tunes from his extensive collection of fiddling LPs.