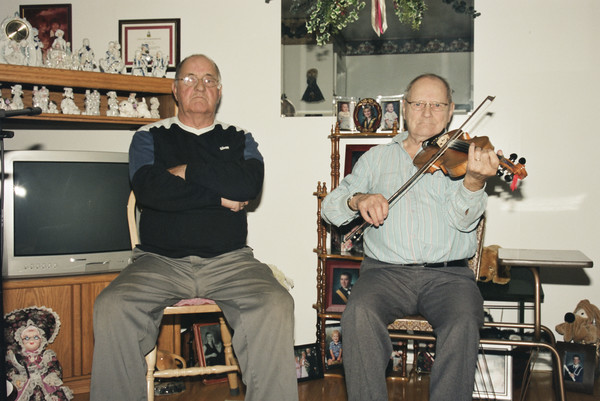 Joe Albert is one of the best West Prince style fiddlers of his generation. He grew up in Western Prince County, where he was raised by his grandfather Little Joe Arsenault. His grandfather played fiddle and frequently hosted music parties, and once Joe also began to play the house became a major gathering place for fiddlers from the surrounding region. When Joe was growing up during the 1930s and 40s, his section of West Prince County was a major center for musical activities. There were many great fiddlers on the go, and locals gathered frequently for house parties and frolics, especially around the onset of Lent on the day following Mardi Gras. Since square dancing was forbidden during the forty days of Lent, Acadians compensated by holding a dance or two nearly every day in the weeks leading up to that holiday.House parties around St. Edward
Read transcriptAlbert, Joe - Fiddlers' gatherings, frolics, Lent customs
Read transcript

Joe learned by emulating his grandfather and other fiddlers in the immediate area. He would often awaken with tunes running through his mind, and found that he was most likely to remember them if he sat down with his fiddle and played before breakfast.How Albert got started
Read transcriptAlbert, Joe - Tune-learning strategies
Read transcript

Joe has lived for much of his adult life in Summerside, where he plays regularly at benefit concerts and senior citizens' homes with the Joe Albert Band. In 2006, he was joined in the band by two of his brothers – Ivan Albert and Ron Albert on guitar – and by Don MacDougall on piano and Jack Darrach on bass. He plays many unusual tunes and variants, and has also composed a few tunes, including Summerside Reel and Northern Breakdown.