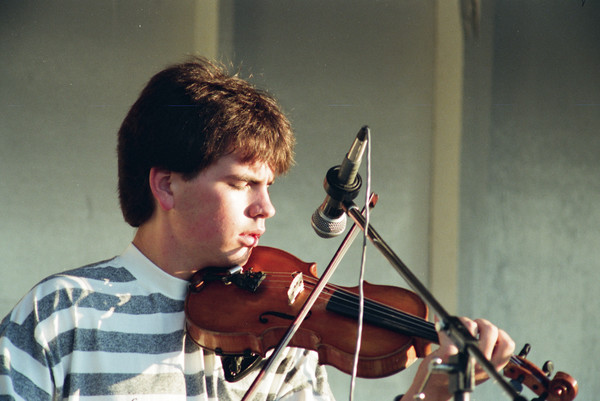 Paul MacDonald was the first young professional-level player to emerge from PEI’s fiddling revival. Although he grew up in Charlottetown, his roots are in northeastern Kings County. His maternal grandfather is fiddler Johnny Joe Chaisson of Souris; JJ Chaisson is his first cousin.

Paul had taken up classical violin at age 9. He had all but given up the violin when at age 12 he attended a music party in Bear River and encountered the music of his Aunt Donna’s brothers, Kenny Chaisson, Kevin Chaisson, and “Young Peter” Chaisson. From that point on, with considerable encouragement and guidance from these Chaissons – he devoted himself to playing “Scottish” (that is, Cape Breton style) fiddle music.MacDonald, Paul - Chaisson brothers are mentors
Read transcript

By 1991, Paul was on his way to becoming a world class player with a fluid, brilliantly phrased playing style and a prodigious musical memory. As witnessed by the medley beginning with St. Kilda Wedding, he was capable of rattling off ten tunes or more in a row without showing signs of fatigue.

In 1992, Paul started teaching fiddle classes himself in three locations on the Island: Montague, Stanhope, and Montague (one of his first students in Montague was in fact Ward MacDonald). Taking into account that a newly minted player was now actively passing on the art to others, this represented the first true indication that the Island’s Fiddling Revival had truly taken root.

Unfortunately for music lovers, MacDonald did not elect to pursue a musical career. In the late 1990s, he left the Island to pursue employment opportunities in Winnipeg.