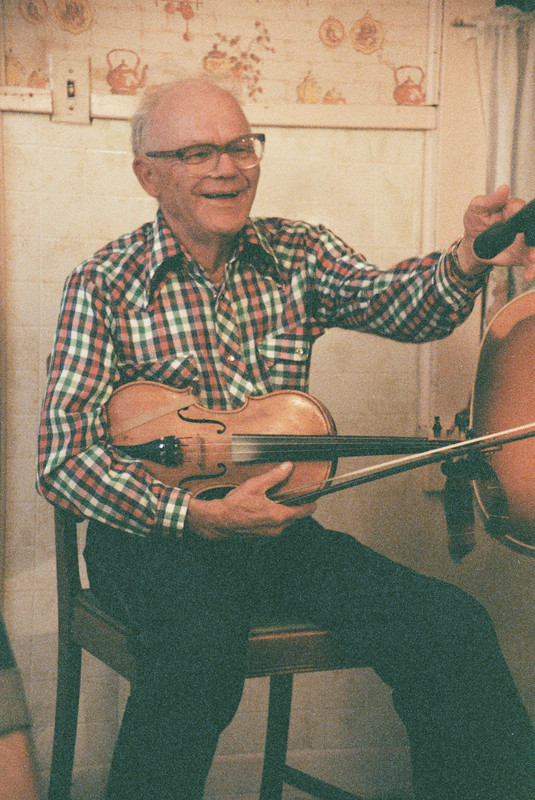 Wilfred Bernard’s first instrument was harmonica; he also played fiddle, guitar, and mandolin, and was a skilled singer. His started at about age 10 on a toy fiddle; his first full-fledged fiddle was home-made by a neighbor. The first tune he learned to play was Judique Reel.

Wilfred picked up his repertoire by ear from local fiddlers such as Angus and Joe MacDonald, and from fiddlers he heard on Island radio, such as Lem Jay and Don Messer. His playing was also influenced by radio broadcasts featuring recordings of early country music from the American South. Wilfred became a great fan of a well-known country music performer named Wilf Carter. He learned many of Carter’s numbers, and sang most of them to his own guitar accompaniment. He also worked out a couple of numbers in which he fiddled and yodeled simultaneously.

Bernard started playing for dances at about age 18, and for over the next two decades he played frequently at house parties and schoolhouse dances throughout northeastern Kings County. He recalls that when he started out the average pay for fiddling at schoolhouse dances was about about $1.50.

In the 1950s and 60s he was a featured performer in the Lem Poquette Show, a troupe of performers who presented variety concerts at community halls around PEI.

Bernard enjoyed tinkering with instruments. He built his first guitar from an old tea box. The fiddle he played at his recording session was originally found in pieces inside an old trunk at the Charlottetown Dump; he then glued it together and reinforced the weak areas with metal bolts.

The Souris Waltz is Wilfred Bernard’s own composition.