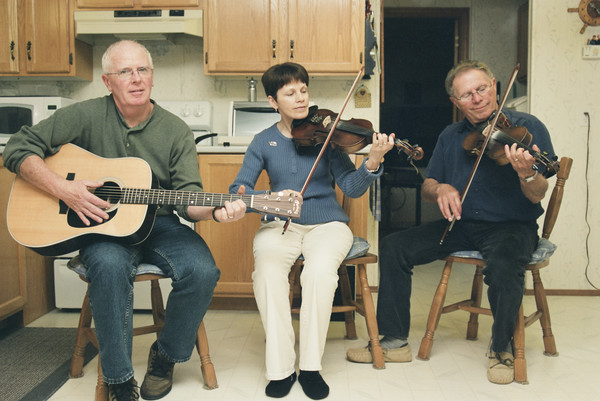 Marie Arsenault Livingstone grew up on a farm in St. Chrysostom; renowned fiddler Eddy Arsenault lived just next door. Her parents and many other local families often hosted house parties (known in French as soirées musiques). Although her older brother, fiddler Edward P. Arsenault remembers quite a bit of square dancing at these parties, by the time that Marie came along the square dancing had pretty much ceased and the parties featured mostly fiddling and step-dancing.

Marie took up fiddle in the early 1990s, when she was about 40 years old. Despite her late start, she plays fluidly and confidently. She also taught herself piano accompaniment (she accompanied her brother Edward on his 2006 recordings), and has done a lot of composing for fiddle. Two of her compositions appear here: Fisherman's Fiddle, and Hermine Gallant's Reel. Two other tunes that she composed – Clamdigger’s Reel and Eddy & Armand – can be accessed through the Edward P. Arsenault bio page.

Livingstone is also a highly active teacher and organizer. She leads weekly Jam Sessions in Wellington, she teaches fiddle and adult step-dancing, and in 2006 had recently taken over the job of organizing the Fiddlers' Jamboree Festival. She also has also compiled a book of hand-written transcriptions and chord charts for hundreds of local tunes.Livingstone, Marie Arsenault - Wellington Jam Sessions
Read transcript