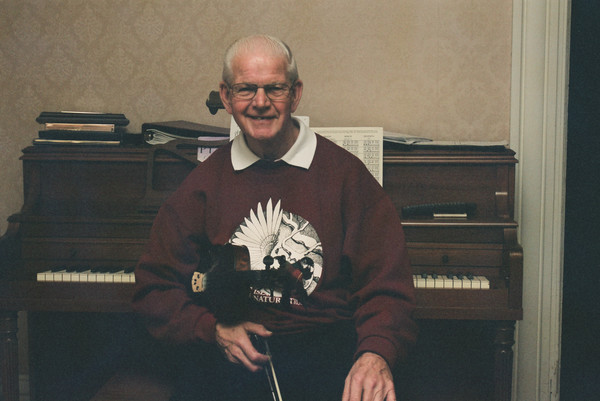 Known throughout PEI as "Father Charlie," Fr. Charles Cheverie headed up the Queens County Fiddlers, a branch of the PEI Fiddlers Society for nearly 20 years. For many years Fr. Charlie taught in the biology department at University of PEI; when he retired from that position he became Chaplain at UPEI, served as a regular parish priest, and was always on the go officiating at weddings, funerals and other milestones.Founding of Fiddlers’ Society
Read transcript

Fr. Charlie’s father had always been a great fan of fiddling and befriended quite a number of Island fiddlers. One frequent visitor to the family home was Joe Pete Chaisson of Bear River in Northeastern Kings County, the father of well known Island musicians “Young Peter” Chaisson, Kevin Chaisson, and Kenny Chaisson. Fr. Charlie took some fiddle lessons during childhood from Joe Pete, but never got serious about the instrument; instead he devoted his musical energies to playing guitar. When Joe Pete passed away in the late 1970s, however, Fr. Charlie attended the funeral and encountered “Young Peter” Chaisson, who strongly encouraged him to give fiddling another try.Encouraged to try fiddling again
Read transcript

When Fr. Charlie began to play fiddle systematically, his primary role models were the Chaisson brothers. Consequently, the style he developed is far closer to the Northeastern Kings mode of playing, than it is to that of his native Queens County.

The Queens County Fiddlers had been formed in the mid-1970s under the leadership of Fr. Faber MacDonald. When MacDonald was made a Bishop in Newfoundland in 1980, the organization seemed to lose its focus. Fr. Cheverie was asked to take over as director around 1985, and by the early 90s the organization was flourishing. One tactic he used to increase membership was recruiting dropouts from Singing Strings, Charlottetown’s classical violin program.Cheverie, Fr Charles - Dropouts from Singing Strings
Read transcript

Over the last several years, he has gradually backed off from his leadership role in the Queens County Fiddlers and has passed the torch to such young musicians as Ward MacDonald, Sheila MacKenzie, and Aaron Crane.

In 1991, Fr. Charlie spoke at length about the customs and social atmosphere surrounding fiddling. Some excerpts are available here: why fiddlers were stigmatized for drinking in public, how fiddlers learned and disseminated tunes heard on radio, why many locals did not appreciate the fiddling style of Canadian media icon Don Messer, and a joke about fiddling whose punch line hinges on the predominant local style of tune learning.Cheverie, Fr Charles - Stigma for public drinking
Read transcriptLearning tunes from tadio
Read transcriptDon Messer’s fiddling style
Read transcriptJoke about priests and fiddlers
Read transcript

In 2006, Cheverie’s focus was largely on recent events and future projections. He expressed disappointment that some youngsters who have learned to play through the PEI Fiddlers’ Society quit prematurely and start performing at Island ceilidhs. He applauded the increase of young women playing. Finally, he projected that Island fiddling would ultimately flourish in the hands of a new generation of players.Rise and decline of ceilidhs
Read transcriptWhy more women are playing
Read transcriptFiddling’s future on PEI
Read transcript