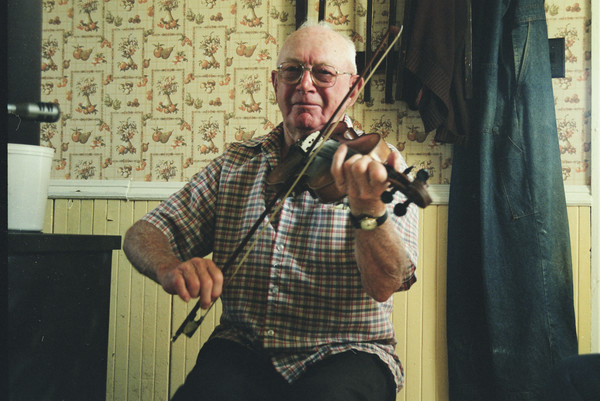 Joe Kearney came from a musical family; his brother William played fiddle and his sisters sang and played the pump organ. His father didn’t play fiddle tunes on any instrument but knew them well enough to correct his sons when they went astray. Joe learned to play fiddle at about 8 years old; he was asked to play for dances almost as soon as word got out that he could play at all. He played for a couple of dances per week on average throughout much of his adult life, often accompanied by one of his sisters on organ.

Kearney learned his tunes mostly from such local fiddlers as Gus Jamieson, Billy and Phillip Murphy, George and Calvin Kemp, and Archie Stewart. He had a powerful bowing arm and played with a strong, infectious rhythm. He also was one of the few fiddlers on PEI who still used the high counter tuning (AEAE), as exemplified on the medley Big John MacNeil / Kitty at the Well.

A few years prior to this recording session, an impromptu music gathering took place at Joe’s sister’s place just down the road, and lasted from early afternoon till the wee hours of the morning. Joe recalls, “We should’ve been puttin' up hay, you know, but we forgot about the hay, forgot about it. The hay got up too, but not that day. That's for sure!”