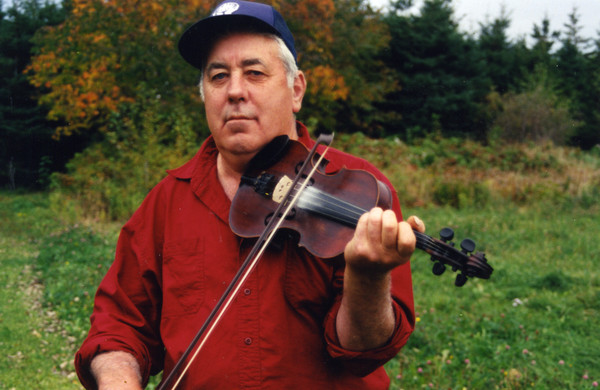 George MacPhee is a strong, elaborate player, and one of the last practitioners of the older Northeast Kings style that predated Cape Breton influence. He comes from a major fiddling family in the region. George’s grandfather was noted fiddler Roddy Joe MacPhee of Selkirk, his father Mel Roddy MacPhee played at most of the house parties and dances around Monticello; and most of George’s aunts and uncles on the paternal side played, such as Hilda MacPhee MacDonald. What’s more, most of George’s twelve brothers and sisters played violin (for example, see the bio of Teresa MacPhee Wilson).

There was plenty of music in George’s house when he was growing up. His father played for his own amusement almost every night, and his mother sang and played pump organ by note (via note-reading). People in the community often jigged fiddle tunes as they went about their daily activities. Sometimes a neighbor named Old Jim Carter dropped by and sang Gaelic language puirt-a-beul (fiddle tune melodies sung with nonsense lyrics).Jim Carter sings for the MacPhees
Read transcript

Mel Roddy introduced George to the fiddle when he was about 6; at first he would sit, hold on to the instrument and finger the notes while George stood between his legs and manipulated the bow. Over the years George learned many tunes from his father, including Roddy Joe’s Reel, Cape Breton Wedding Reel, and a pair of tunes once used on Prince Edward Island to accompany the Wedding Reel dance: Christie Campbell and PEI Wedding Reel. On the night that Mel Roddy passed away, George dreamed that his father was playing a tune on the fiddle, and awoke with that tune – now known as George Mel’s Dream – in mind.Descripition of Wedding Reel dance
Read transcript

Once George got underway, he expanded his repertoire by listening to the fiddlers who played at local dances, such as “Old Peter” Chaisson, Connie Gallant, JD MacAdam, Neil MacCormack (who also owned the local general store), and Josie MacIntyre. Whenever he could, he would watch older fiddlers to see how they used their bows and fingers.

Before long, George was playing regularly at house parties, schoolhouse dances and old-fashioned weddings all along the North Side of Kings County. In the late 1980s and early 90s, he often played at local events such as benefit concerts and the Monticello Tea Party, he also provided music at the Circle Club Dance in St. Peters.

Of special note: MacPhee dropped by one evening just as Buddy Longaphie’s session was winding up.George then played a few tunes, and – rooted on by Buddy – recorded some truly inspired tracks (see Phiddlin’s Phil and the medley beginning with Killekrankie).