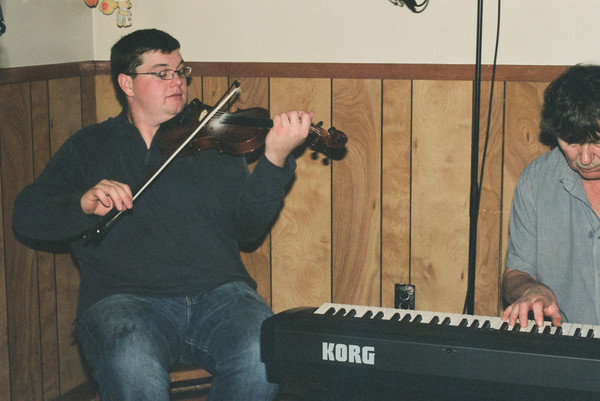 JJ Chaisson, 2006; his uncle Kevin Chaisson is at the piano

The Chaissons of Bear River are without doubt one of the the preeminent fiddling families on PEI. JJ Chaisson is a member of this clan via his mother Donna; his maternal uncles are three extremely adept and influential musicians – "Young Peter" Chaisson, Kenny Chaisson and Kevin Chaisson - and his maternal grandfather was the well-known fiddler and organizer Joe Pete Chaisson. His paternal grandfather was fiddler Johnny Joe Chaisson of Souris (a very distant relative of the Bear River Chaissons).

JJ grew up in an extended family atmosphere that was almost perfectly designed to turn out promising musicians. Parents, aunts, and uncles were knowledgeable and encouraging, but at the same time quick to intervene with advice or constructive criticism when the situation warranted. What’s more, a highly competitive atmosphere developed among his many cousins that kept everyone focused on excelling.Extended family dynamics
Read transcript

The selections available here represent three stages of JJ’s career. The medley beginning with Dusky Meadow Strathspey was recorded in 1992 when Chaisson was 10 and showing great promise. A set of recordings made in 1996 when JJ was 14 – the medleys which include Cooley’s Reel, Judique Jig, and Mary Hughes’ Jig – indicate a rapidly maturing player with tremendous natural facility. The most recent set of recordings display a fully developed musician at the top of his game (medleys starting with Darla's Jig, Icing on the Cake, JJChaisson06 Strathspey 6, and Julie’s Reel).

Chaisson’s first solo CD, called In the Genes, was released in 1997. Soon afterwards, he began touring as a soloist and also joined with several cousins to form a successful Celtic Rock band called Celtic Tide (later renamed Kindle). Although a promising music career beckoned, he elected to stay near home and set himself up as a lobster fisherman in Souris. He still plays prodigiously during the ten month off-season, and as he expresses it, tunes old and new are continually going through his head. Of late he has been devoting a lot of time and energy to composing (Julie’s Reel, Tiddle Winks, and Icing on the Cake are his handiwork). He has also been thinking a lot about the direction of Island Fiddling, and has high hopes for the future.Chaisson, JJ - Tunes spring to mind
Read transcriptChaisson, JJ - Future of Island fiddling
Read transcript