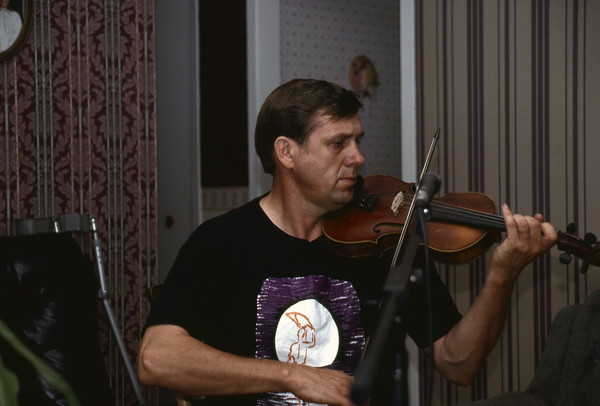 When Kenny Chaisson was young, his father and uncles – Joe Pete, Emmett, and “Old Peter” Chaisson – used to play frequently at local house parties and schoolhouse dances. What’s more, the family home always seemed to be the place for people in the community to congregate when they were looking to hear some music.House parties around Bear River
Read transcript

We were around it all the time. People used to go out home to my father's place after church, and I mean just automatically, fifteen, twenty, thirty people, and they'd sit around the livin' room, and my uncles would just play. And they'd do that all Sunday afternoon, Sunday night, and I was exposed to it.

Kenny started playing at about age 13. Once he was underway, Joe Pete imbued him with an admiration for Cape Breton fiddling, and made available his extensive collection of fiddle recordings. The family also listened regularly to CJFX, a station out of Antigonish, Nova Scotia that frequently broadcast Cape Breton fiddle music. Kenny remembers that they listened in particular to Winston Fitzgerald, Little Jack MacDonald, and Joe MacLean.

Joe Pete had great ambitions for his sons, and insisted that they apply themselves rigorously to practicing their instrument. As Kenny recalls, “ He'd think nothing at all of taking us out of bed at two o' clock in the morning and makin us sit in the chair there and learn a turn of a tune, and he wouldn't let us go to bed until we learned it.” His father would also insist that the tunes they learned by ear were correct in every detail: “ If somebody had made a tune, he figured the least people could do was get as close to being right as possible.”

As he came into his own, Kenny developed into a superb player with a vast repertoire. He often ventured into difficult fiddle keys such as Bb and F, and reveled in performing tunes whose intricate fingerings might intimidate an average player. He also became a prolific composer; three of his tunes are featured here: Bradley’s Reel, Names Escape Me, and Randy’s Reel.

Of special note: Kenny and accompanist Lemmy Chaisson discuss a nearby community where until recently a local church had disapproved of dancing.Chaisson, Kenny - Strictures against dancing are relaxed
Read transcript