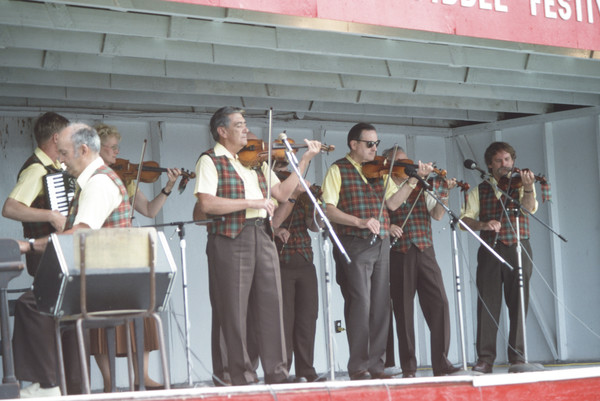 By the early 1990s, the Prince County Fiddlers consisted of about two dozen active members, and membership was more or less evenly split between older, traditional players and newcomers. The group played a more eclectic repertoire than did their Queens and Kings County counterparts. In addition to Scottish and Cape Breton tunes, they also performed Irish, Appalachian, New England, Québecois, and local tunes – including some composed by its own members. They were also the most adventuresome branch in terms of musical arrangements; some selections featured soloing or harmonizing, while others called for division of the group into sub-ensembles, changes in dynamics, and a variety of other devices common to band-craft.

Both medleys available here represent the 1992 ensemble playing at their rehearsal space in Summerside.

Gauthier left the Prince County fiddlers in 1993, and for about a decade the branch was led by Pete Dorion. By 2006, leadership of the group had passed to a rotating crew of newcomers. Of the original founding members, only Jim MacDougall was still a regular participant.

In 2006, several of the regulars – including MacDougall, Patsy Bolger, Leith Thompson, Darlene Harding and Peter Robinson – often performed as a separate ensemble. To hear their sound listen to the medley of jigs beginning with Spin ‘n’ Glow on the Jim MacDougall site.