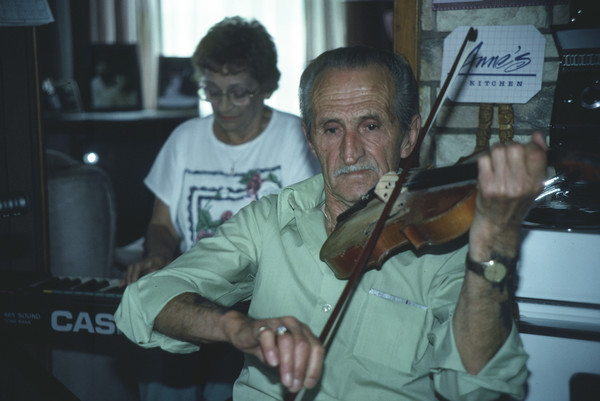 Ervan Sonier was perhaps the last of a long line of fiddling barbers in eastern Prince County (a well-known predecessor was Jimmy Bearisto). As a young child, one of Ervan’s favorite games was pretending he was a fiddler. He finally got his hands on an instrument at age 14, and learned his first tunes with help from his cousin Beatrice, who could play tunes right out (note for note) on the piano. Later on, he learned tunes from Jack Proveau – an itinerant fiddler who often wintered at the home of his grandfather – and from broadcasts of Cape Breton fiddlers such as Angus Chisholm and Winston Fitzgerald.Pretend fiddling
Read transcript

Sonier was playing for dances by the time he was 16, and for several years he played extensively for house parties and informal dances in and around Summerside. He recalls that in those days a fiddler arriving at a house dance would often be treated like a celebrity.Arriving fiddler is lionized
Read transcript

Ervan also played at the commerical dance halls that were just springing up at the time in Prince County, such as the Ritz Hall, the Sunnyside Hall, and the Western Star (where decorum broke down so often that it was generally referred to by locals as “the Bucket of Blood”). He notes that for playing all night at such places he might be paid all of two dollars: “I don't know if there's anybody ever made any money playing the fiddle. Probably Don Messer or somebody like that, but around here nobody made money.”

Sonier never went back to dance playing after he returned from serving in the Second World War, but a developing friendship with fellow fiddler Toussaint Arsenault kept him musically active. Arsenault taught him quite a number of tunes and helped him improve the efficiency of his bowing style. After Sonier opened his barbershop, Toussaint would often drop by around closing time and the two would play till midnight.

Over the next few decades Sonier and Arsenault often performed together at local benefit concerts and other public events. Their music was often featured on the West Prince Party Line Show, and they helped found the Prince County Fiddlers. When Arsenault sufferred a stroke in the late 1980s, he was only able to remember his tunes when Sonier came by for their weekly music session. We were lucky enough to record one of these sessions.

Sonier composed several fiddle tunes, among which are Seaweed Reel, and The Mug & Brush Reel.

Of special note: Sonier’s story about legendary fiddler Guy Boulter, who is said to have been so focused on playing fiddle that he neglected “real” work."I'd save to say it's a bad instrument”
Read transcript