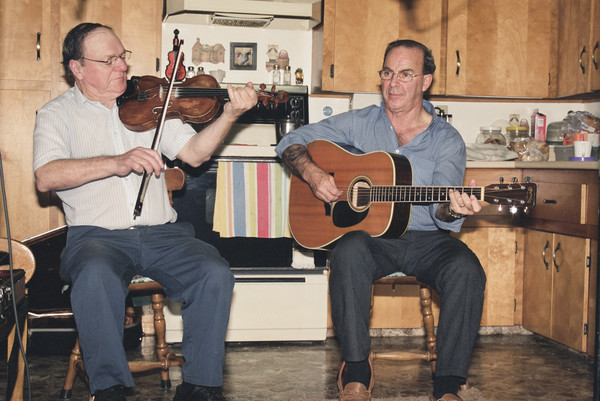 Vincent Doucette is a highly active guitar accompanist and singer from western Prince County; for many years he was the primary accompanist for fiddler Dennis Pitre, and a favored accompanist of both his father Joseph Doucette and his brother Victor Doucette. He grew up in a household with nine brothers and five sisters, and music always formed an important part of daily life. His father Joseph was a noted local fiddler, and most of his siblings played either fiddle guitar. As he recounts, “There was no TV, no phone, and the only means of transportation when I was growing up was horse and wagon; so everybody had their musical instruments in their houses.The people that were more well off had pianos and organs, and of course at our place we had a guitar and a fiddle. So there was always music and everybody used to play music almost every day."  On Sunday after­noons the extended family would gather at his paternal grandfather's house in Harper Road and share music making for many hours. And almost every Saturday there would be a house party somewhere in the area, featuring step dancing, square dancing, singing, and other kinds of music making. The most popular style of square dancing in the region was known as the quadrille and flux.