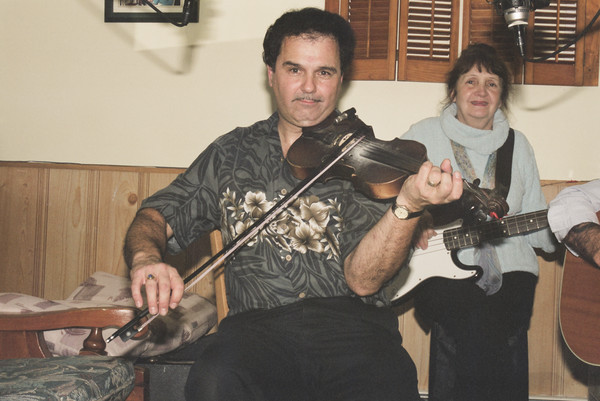 Victor Doucette was one of the last fiddlers with a traditional regional sound to develop on PEI (some others include Jackie Biggar, Louise Gallant Arsenault, Peter Arsenault, and David Gaudet). Although he has developed into a powerful, lively player with an unmistakable West Prince flavor, he hardly ever plays traditional fiddle outside the circle of his family and immediate acquaintances. In fact, most of his public musical activities are within the context of a country-music band, in which he plays fiddle and guitar, and his wife Cathy plays bass.

Victor is the son of noted West Prince fiddler Joseph Doucette, and is the youngest of 15 children: “I remember when I was 5, 6 or 7, I just couldn't wait to hear Dad play because he had this liveliness in him.” When Victor was growing up in the 1960s, house parties in West Prince County were still relatively commonplace and there was plenty of traditional fiddling on the go.

Victor took up the fiddle at age 9 and at first was serious about playing; then he got away from it as a teenager when rock ‘n’ roll became popular among his peers. He returned to the violin in the late 1970s, and often found that playing together and swapping tunes was the best way to develop a special relationship with his father. Although Victor’s tune versions are very much like Joseph’s, they are far from identical. He points out that there is a natural variation that often results from learning by ear, and that he also tended to change certain phrases whenever his father’s versions seemed awkward to play (since Joseph Doucette’s music is also available on this site, listeners can compare their respective versions of Buckley’s Favorite. Pride of the Ball, and Paddy on the Turnpike).Fiddling brings father and son closer
Read transcriptDoucette, Victor - Tunes change when learned by ear
Read transcript

An amusing story: Joseph Doucette was an avid woodcarver and fashioned a set of dolls, which attached via a contraption to the foot and appeared to dance as the fiddler tapped. These puppets were dressed in traditional Acadian clothing, but at one concert a male doll experienced a wardrobe malfunction.Puppet has embarrassing moment
Read transcript