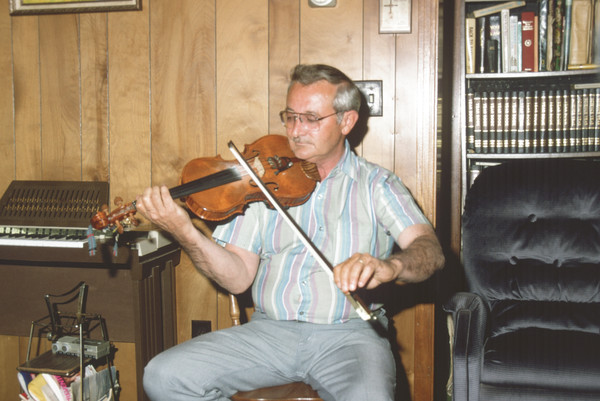 In the early 1990s, Dave Thomson ran a weekly square dance at Club 56 in Hillsborough Park; he was one of four old-time fiddlers who ran weekly square dances at the time within a ten mile radius of Charlottetown (the others were Reuben Smith, Stephen Toole, and Elliott Wight). Thomson elected to discontinue the Hillsborough dance c. 2004, having found that it had simply become too tiring to take on what amounted to a second job. With all these dances now gone and no new ones to take their place, this was probably the first time since the quadrille first came to Charlottetown in the 1840s that the area had no regular access to square dancing.

Dave grew up in a fiddling family near Charlottetown; both his grandfather Fulton Thomson and his father Dave Thomson, Sr. played. Sometimes Fulton would work all day for the railroad, play all night at a house party, then get home at four in the morning and change his clothes to go back to work.

A natural southpaw, Thomson was sent for violin lessons as a child to a teacher who tried to get him to bow right-handed. This approach did not take, and he later re-taught himself to bow left-handed. Because he strings his violin in the conventional – or right-handed – manner, however, this puts the first string farthest away from his bowing hand (and situated on the descending side of the bridge). Therefore, he must often manipulate the bow at difficult angles in order to play even the simplest passages.

Thomson grew up a big Don Messer fan, and he learned quite a bit of his repertoire from that source. His style is very much in the Western Queens County vein, however, featuring both Scottish and West-Prince style flourishes. In part, however, these West-Prince style syncopations might be a family legacy, since both father and grandfather grew up in O’Leary.

After he gave up dance playing, Thomson began to play regularly with a group of music enthusiasts that included MacRae and Vessey, his accompanists at the 2006 interview. The group appeared frequently at local benefit concerts, and for a while played regularly on Island public cable TV. During the summers, they would periodically congregate at public campgrounds -- with families in tow -- for a few days of undistracted music making.