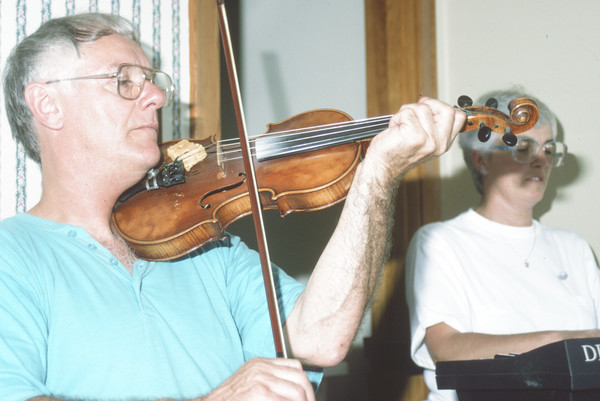 Elliot Wight exemplifies the Queens County style of playing, joining together some of the noting-hand flourishes of the Island’s eastern styles with an approach to syncopation that is reflective of its western styles. His playing is both powerful and inventive, and several of his selections appear on the Rounder CD, The Prince Edward Island Style of Fiddling: Fiddlers of Eastern PEI.

Wight played regularly for commercial square dances in Queens County from roughly the mid-1960s until 2005; for much of this time he organized his own dances at such venues as the North River Fire Hall, the Eldon Legion, and at 56 St. Peters Rd in Parkdale near Charlottetown. Piano accompanist Judy Lowe, who played in his dance band from the late 60s onward, attributes his longevity as a popular dance player to the infectiousness of his rhythmic attack.Why Wight’s weekly dance lasted
Read transcript

There was no music in Elliott’s immediate family, but when he was growing up he often attended nearby house parties and other community dances. He got himself a guitar at age 12, then bought his first fiddle for $5 from a fellow who worked fishing lobsters with his father. One of his early inspirations was Don Messer, whose broadcasts appeared a few times a week on radio station CFCY. Some local fiddlers that he often had the opportunity to hear were Angus Leslie, Danny, and Clarence MacLean; and Peter Beaton. Elliott started playing for dances at 15 at the Belle River Hall. After moving to Charlottetown, he began playing extensively for house parties and country showers within about a 25 mile radius of the provincial capital.Wight, Elliott - Hearing Messer on radio
Read transcriptWight, Elliott - Playing at wedding showers
Read transcript

Wight’s Reel and Freetown Reel are Elliott’s own compositions.