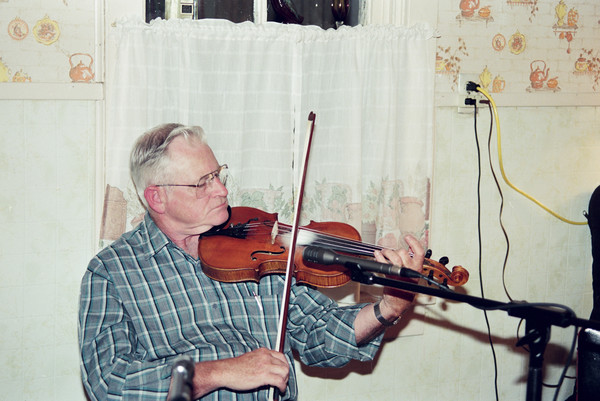 Francis MacDonald comes from a long line of fiddlers on both sides of his family. In fact, family lore has it that his fiddling ancestors were on the very first boatload of Scottish settlers that landed at Tracadie Bay in the 1790s.Fiddlers in the family
Read transcriptMacDonalds come to PEI
Read transcript

Francis’ father Ronny MacDonald was a noted local fiddler. His family often held house parties; there was also dancing at schoolhouses, and at community fund-raisers such as socials and church picnics. Sometimes of an evening Ronny would invite a few other fiddlers in to swap tunes; Francis would be in bed upstairs listening to the music and yearning to play it himself. He took up the fiddle in earnest at about the age of 9 or 10.Dances around St. Peters Lake
Read transcriptDeveloping the urge to play
Read transcript

MacDonald’s father showed him how to use the bow; from that point he learned by watching his father and the other older fiddlers, including Joe MacDonald, Hector MacDonald, and Victor McPhee (an uncle of Angus McPhee). Once he got started, playing technique seemed to come naturally; he then expended his repertoire by listening to other players and to radio broadcasts.

In the 1970s, Francis fell in with the Eastern Kings Fiddlers and began to systematically pursue the Cape Breton playing style and repertoire. He still plays plays powerful, lively versions, however, of such local favorites as Farmer’s Reel, Ottawa Valley Reel, Princess Reel, and Paddy on the Turnpike.

MacDonald played regularly at commercial dance halls in northern Kings and Queens Counties from the 1950s into the 1980s. In the early 1990s, he  played regularly at a weekly dance in Tracadie. In 2006, he was often the featured fiddler at the Goose River and Lorne Valley Dances.