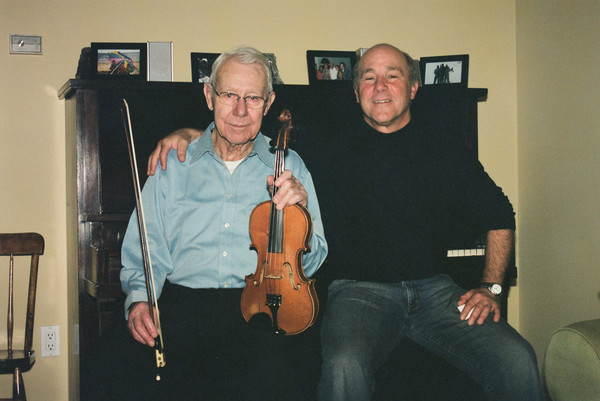 Omar Cheverie is the grand nephew of Neil Cheverie, the lobsterman from Northeast Kings County who won first prize at the Great Fiddle Contest of 1926. Not only was Neil still in his prime when Omar was young, but there were also several other fiddlers in Omar's immediate family, including his grandfather, his father, and several uncles. The Northeastern Kings County region of Omar’s youth was also replete with fiddlers: among them were perhaps a dozen great players and countless "frolic fiddlers" (those who played at least well enough to accompany a dance).Cheverie, Omar - Neil Cheverie and his music
Read transcript

Omar's father Joe Cheverie was a fisherman, and used to play fiddle in the evenings as a means of relaxation. When Omar was young, he used to sit alongside his father during those evenings; as the latter played, Omar would pretend to fiddle and "jig" (sing) along. This is how he learned his first tunes. Eventually Omar’s ear grew so adept that he could remember much or all of a tune after a single hearing. He figures that by now he may well know as many as 5,000 tunes.Cheverie, Omar - How Omar got started
Read transcriptCheverie, Omar - Remembering tunes
Read transcript

Omar started to play at age 11, when he was just big enough for his left hand to reach the fingerboard of his father's fiddle. Like most budding fiddlers of his generation, he received little in the way of technical help and had to learn largely through observing and listening to older players. He progressed rapidly, however, and by 13 he was playing for dances.

The first tunes Omar learned to play were Old Dan Tucker (a jig not at all related to the famous tune of the same name by American banjoist Dan Emmett) and Frank’s Jig. His early repertoire consisted entirely of local tunes, but he became intrigued by the Cape Breton fiddling sound in his late teens, and since then he has learned most of his repertoire either from Cape Breton recordings and broadcasts, or from personal exposure to Cape Breton fiddlers (he played at a few concerts on PEI where Winston "Scotty" Fitzgerald was the main act).Cheverie, Omar - The Cape Breton influence
Read transcript

Although Cheverie’s playing has been strongly influenced by the Cape Breton sound, it still has plenty of Island flavor. This flavor comes out most strongly in such tunes from his early years as Pigeon on the Gatepost, the Drunken Piper, and Marchionness of Tullybardine, a pipe-march learned directly from his great-uncle Neil. He makes the point that many older Scottish tunes were in active circulation on PEI -- and were in fact regularly played by many Northeast Kings players -- long before the Cape Breton recording and broadcast industry got seriously underway in the mid-1930s.

Although beset with arthritis and a permanent injury to one left-hand finger, Omar Cheverie was still playing beautifully and with considerable feeling at age 81. He had recently put in a guest appearance on a CD released by his son Randy’s band, Boys in the Kitchen. As a suitable valedictory upon his musical career, he describes a recent encounter in which a women who had heard the recording remarked, “That feller knows how to play a fiddle.”Cheverie, Omar - Valedictory
Read transcript