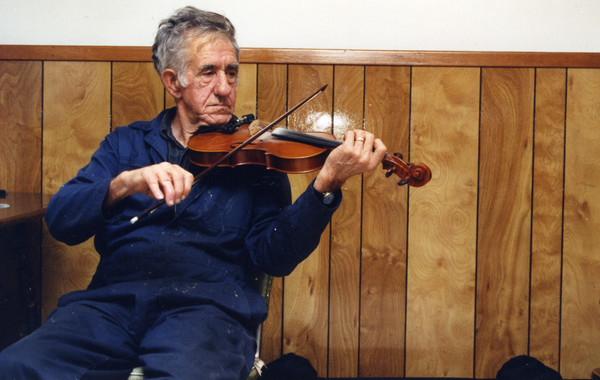 “Old Peter” Chaisson (so named to distinguish him from his fiddling nephew “Young Peter”) was one of the pre-eminent Island fiddlers of his generation. His sound was flowing and lyrical, without sacrificing the drive and strong bowing accents required for good dance playing. He blended an ornate approach to ornamentation derived from Cape Breton fiddling with the more rolling bowing attack that characterizes older styles of Island fiddling.

Chaisson grew up in a major Northeast Kings fiddling family. His father Pete Simon played for local dances, and his considerably older brother Joe Pete was also an avid player. “Old Peter” started playing at age 8, with his “feet up in the chair trying to hang on.” Almost immediately, he began picking up tunes from Nova Scotia radio broadcasts featuring such Cape Breton fiddlers as Dan J Campbell and Angus Chisholm. He also picked up tunes when he attended local dances: “You just heard them, and boy, they'd kind of click in and you'd start picking it up. It came pretty simple to me, when I think of it. Just hear a tune a couple of times, eh; that was it!”

Chaisson started playing for dances himself at about 18 and for over two decades he played extensively at houseparties, weddings and other community dances throughout the Northeast Cape. He was also a frequent and highly enthusiastic competitor at local fiddle contests: “They used to go from Char​lottetown to East Point, and I was in on them all. You either win or lose, but I was always pretty lucky: got in the second, or third, or first.”

In the early 1950s, Joe Pete began to amass a considerable collection of Cape Breton fiddling recordings. The two brothers began mining this collection for new repertoire. Not satisfied with just this source, they sought still more tunes from old tune collections. Although neither of them could read music at the time, they found a fiddler named Bill Weatherbie in Charlottetown to serve as intermediary. The brothers would sojourn at Weatherbie’s house for days at a time while the latter played at random from tune books; when they heard a tune they liked, they’d get Weatherbie to keep repeating it until they could pick it up by ear.

In the late 1970s, “Old Peter” became a founding member of the Eastern Kings Fiddlers, he also performed regularly at the Rollo Bay Fiddle Festival. He undoubtedly served as a musical role model for his nephews, “Young Peter” and Kenny. In addition, new generation player Paul MacDonald cites him as an early mentor.