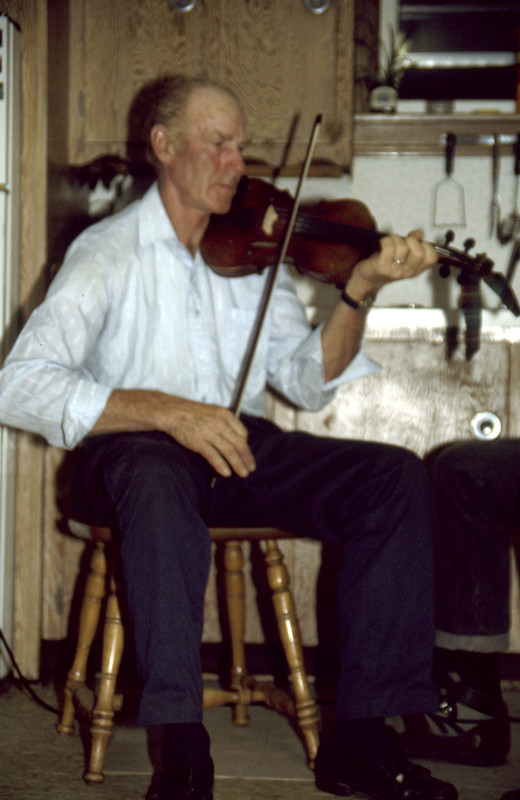 Merlin Quinn grew up on a mixed farm in Central Kings County. His father Richard Quinn was a great singer, and in the evening the neighbors often congregated at the Quinn home to swap songs. Merlin’s father didn’t play fiddle but loved fiddle music. On Sunday evenings, he often invited Cosmas Sigsworth and his wife Rita down from Cardigan to play fiddle and guitar. And if anyone happened by who could play, even if it was during the work day, everyone stopped whatever they were doing and listened to the fiddle.Quinn, Merlin - Farm life around Cardross
Read transcriptQuinn, Merlin - All work stopped when fiddler arrived
Read transcript

Merlin was about 15 when he felt inspired to take up the fiddle. Although he already had quite a number of tunes in his head, at first he had no idea how to find them on the instrument. He finally got help from a neighbor named Art MacEachern, who showed him where the notes were and how to finger the strings. The first tune he played was Wreck of the Old No. 9.Quinn, Merlin - A great thing if he could play
Read transcript

Eventually, Merlin developed a learning style where he would whistle a tune and then hunt around for notes on the fingerboard at the same time. Bowing always came easy to him, which made him a good dance fiddler.

Most of the square-dancing in the region at that time was at the schoolhouses. These would be organized by a local committee, in an effort to raise money to support school operations.Quinn, Merlin - How events were organized
Read transcript

Quinn told us that he first learned how to square dance from his sisters.

I had four sisters, and they used to get after me to take them to the dance in the horse and wagon. And I didn't want to go because I couldn't dance at all. So to get me primed they got teachin me to dance. We got down in the front room on Sunday evenings, and [they’d’] show me how to go through the sets. So I finally caught on.

Merlin told us that swinging properly requires picking up on a certain coordination and rhythm. In turn, understanding this rhythm was crucial to developing the kind of fiddling sound that Islanders perceived as lively, and that made them want to get up and dance.Demo: proper rhythm for swing-partner
Read transcript