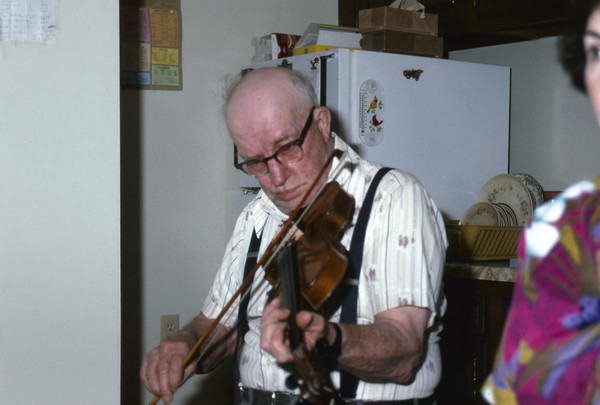 Johnny Morrissey grew up on a farm that had been in his family’s hands since the last decades of the 19th century. His forbears on both sides came from Ireland. As it happened, it was his mother’s side of the family, the Martins, who were the musical ones. His mother step-danced, one of her sisters played fiddle and was a noted step-dancer, and his maternal grandmother was a great singer.

Morrissey took up the fiddle at age 15, inspired by a musical neighbor, and played for his first set of dancers a few months later. Once he got started, he found that many of the tunes he heard at local dances would stick in memory.Hearing his neighbors play
Read transcriptTunes spring to mind
Read transcript

Some of the fiddlers who played at these dances were Frank McCabe, Joe Griffin, Billy Morissey, Clarence MacLean, Danny MacLean, Jimmy MacLean, Pat Bolger, and John Ross. Morrissey remembers in particular that when Angus Leslie MacLean played at the Eldon Hall, you could hear Princess Reel ring out all over town.

Johnny developed a sweet, lilting style of playing that was well suited to the Quadrilles and Lancers that people enjoyed dancing in southeastern Queens County. He recalls that back in the 1940s, people in his area took turns hosting weekly house parties during the winter. They’s start out playing cards (whist was the game of choice); then someone would bring out a fiddle and off they’d go, dancing till the wee hours.