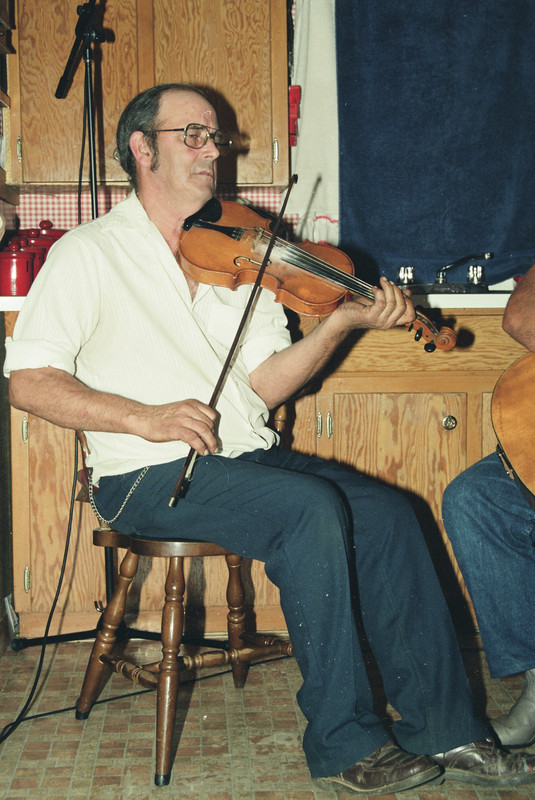 Danny MacLean came from a long line of fiddlers. His great grandfather, Big Angus MacLean came to PEI from Cape Breton and played both pipes and fiddle; his grandfather Lauchy MacLean was a noted fiddler who never played for dances (“He just didn't believe in parties; we were kind of religious people”). Danny’s father Angus Leslie MacLean was the best known fiddler in his region and played widely at local house parties, hall dances and weddings, and his brothers Jimmy, Clarence, and Charlie were also well known local players. Given this background, it is not surprising that Danny strongly believed that fiddling was a gift passed down as a family inheritance.MacLean, Danny - Fiddling passed down in families
Read transcript

When Danny was growing up, neighbors often dropped by the MacLean household during leasure hours in hopes of having the opportunty to hear fiddle music; sometimes they would step-dance on these occasions or even get up a square set.Neighbors drop by the MacLeans
Read transcript

Although most Island fiddlers felt protective of their instruments, Angus Leslie seems to have been more “strict with the fiddle” than most. Neither Clarence nor Danny ever got their father’s permission to play on his fiddle. Danny in fact never played much at all until he left home and went off to work in the lumber woods of New Brunswick and Québec. He not only taught himself to play in the logging camps, but learned much of his repertoire from fellow loggers (one tune he learned during this period was Plaza Polka).Learning tunes in the lumberwoods
Read transcript

MacLean also picked up many new tunes from the radio; one of his favorite stations was WWVA, Wheeling West Virginia.

Danny started playing extensively for Island dance parties, schoolhouse dances. and weddings in the late 1940s and early 50s; at that time there was a dance almost every night within a few miles of Garfield. He also learned to play guitar around this time; he then formed a duo with his brother Clarence, and later worked in a band with his brother Jimmy.MacLean, Danny - House parties around Garfield
Read transcript

Danny stopped playing for dances regularly after he married in the mid-1950s, and since then has played mostly for his own amusement. In the 1980s and 90s, he often entertained on a volunteer basis at nursing homes and assisted living centers, sometimes accompanied by his son Donny on guitar.