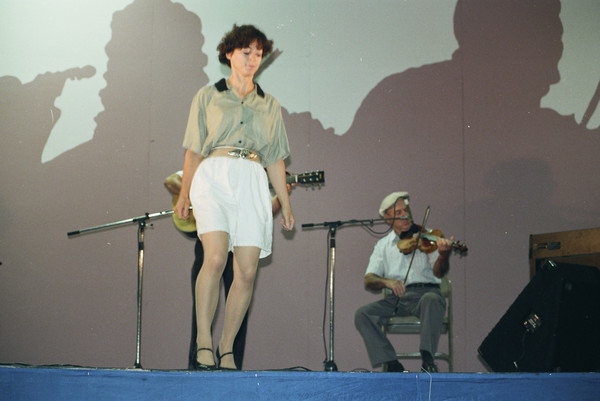 Hélène Arsenault Bergeron was a member of Barachois (pronounced “ba-ra-SHWAH”): the first PEI based group to tour internationally since Don Messer and the Islanders. Barachois, which developed in the mid-1990s, had its origins in a local dinner theatre presentation and focused as much on slapstick, skits and well-orchestrated stage presentation, as it did on music. Both the fact of their success and their presentation style had a considirable influence on the next generation of Island bands.Bergeron, Helene Arsenault (speech) - Origins of Barachois
Read transcriptInfluence of Barachois
Read transcript

Hélène is the daughter of well-known Evangeline Coast fiddler Eddy Arsenault. When she was growing up the entire region was a hotbed for music parties. Fiddles, accompanists, step-dancers, and their families would frequently gather together and play through the evenings. This high energy atmosphere, in which “people were always jumping up to dance” inspired her to take up step-dancing herself.Bergeron, Helene Arsenault (speech) - Fiddling style developed to make people dance
Read transcript

At first, Bergeron learned by watching older dancers in the community; she then picked up more structured steps by attending contests and watching dancers who had learned at step-dancing schools, which were then quite new to the Island. Soon she and a number of similarly-minded friends were making up their own steps; sometimes they would put on small shows in a local barn where they charged a small admission and danced to fiddle recordings.

Bergeron got away from dancing in her mid-teens and left the Island for a while in her early 20s. Upon her return in the mid-1980s, she won a couple of dance contests and started teaching step-dancing locally; she also became deeply involved in the burgeoning Acadian Cultural Revival. By her mid-30s, she was considered one of the best step-dancers on the Island.

Hélène took up piano accompaniment in the early 1990s, more or less adopting the Cape-Breton oriented stylistic approach that was pioneered on PEI by Kevin Chaisson. She made considerable use of both her dancing and accompaniment skills while performing with Barachois.