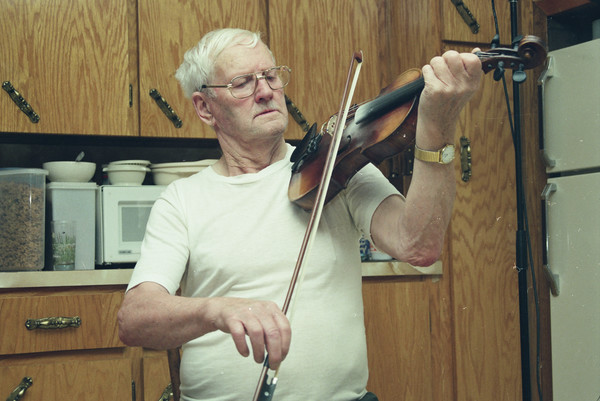 Sid Baglole was an extremely powerful player with with a compelling bowing rhythm and a prodigious memory for tunes. His repertoire was a treasure trove of older tunes that most other fiddlers of his region had forgotten. Among such tunes are Freetown Reel, Sid Baglole's Reel, and Sid Baglole's Tune. He also played a number of tunes generally associated with Southern US fiddling, such as Sugar in the Gourd, Stone’s Rag, and Wreck of the Old No. 9.

Baglole had musicians on both sides of the family, and learned how to play by observing and listening to older players. He developed quickly and was soon playing regularly for house parties in and around his community; he reckons that within a 5-10 mile radius of Southwest Lot 16, there was once probably a house party nearly every day of the week, year round. For much of his adult life, Sid did most of the dance fiddling in and around his home district.Baglole’s musical background
Read transcript

When radio came in, Baglole also began learning tunes from that source. He remembers specifically learning “French” tunes from CHCN (New Carlistle, Québec); he also remembers hearing American and Nova Scotia stations. His own music was occasionally featured on the West Prince Party Line Show, which was broadcast from Summerside on CJRW.

In later life, Baglole moved closer to Summerside. For a few years, he took on the job of playing for weekly dances at the Seniors Club at Parkview Hall (the previous fiddler had been let go because the old folks complained his playing wasn’t  lively enough).

Because Sid did not join any fiddlers clubs or organizations, and because he generally did not participate in benefit concerts or other local talent shows, by the early 1990s most people had pretty much forgotten about him. We located him entirely by chance; a neighbor of his happened to be waiting next to me in line at a Charlottetown bank. In 1996 when we recorded The Prince Edward Island Style of Fiddling CDs, Sid at 84 played beautifully and virtually error-free for four hours straight.

Of special interest to Appalachian-style fiddlers: Baglole often substitutes west-Prince style suppressed downstroke syncopation for the kind of syncopated bowing that American fiddlers would use.